With the PV system in operation since May 2014 the environmental benefits have become quite evident. Annually the company is saving 400 tonnes of CO2 while also producing 760,000 kWh of clean electrical power. 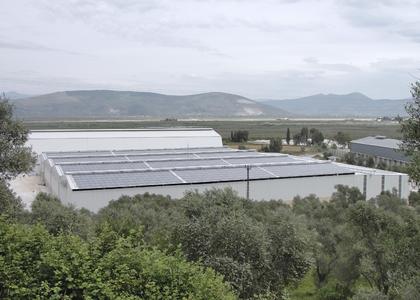 Esan was founded in 1978 with the purpose of supplying raw materials for the ceramic sector. Since its foundation, Esan has expanded its operations by adding metallic minerals production to its business lines. And as of today, with 24 mines and 6 processing plants, Esan is one of the leading producers and exporters of feldspar, quartz, kaolin, ball clay, bentonite, zinc and lead concentrate in Turkey.

The company’s core values are focused on running its business operations in a responsible manner that benefits the environment, society and its employees. In keeping with the spirit of these values the company decided to install a PV system at their Mugla, Turkey site.

At the Mugla operations the main activity is the processing and warehousing of Feldspar, a raw material used in ceramics. Feldspar, coming from Esan’s own mines, is brought to the site, treated and packaged and then sent out by truck to regional seaports for worldwide distribution.

Esan put the PV system project out for tender and the firm Renesis Energy Systems was eventually awarded the contract. Renesis, a consulting firm with headquarters in Instanbul, Turkey was founded in 2011 and offers EPC solutions for companies that would like to invest in renewable energy, particularly solar, wind and bioenergy.

Renesis planned for a 499 kW PV rooftop system at the Mugla site and construction began in November 2013. The system size was determined by the FIT (feed-in tariff) regulation in Turkey. At this time PV systems 500 kW or smaller did not require a special license and could claim the FIT. Since then the regulation has changed offering the FIT for electricity produced by PV systems that are 1 MW or lower.

A second challenge was deciding where to locate the inverters for the system to avoid damage from the large amounts of dust produced during the crushing and processing of Feldspar. It was determined to put the inverters into two central concrete buildings, in the vicinity of the plant to help reduce exposure to damaging dust. Because the buildings had to be placed 100 – 150m from the solar arrays, the voltage drop over the long distance had to be carefully considered in the system design.

Solivia TL solar inverters from Delta were selected for the PV system. A robust electronic design and IP65 sealed chassis characterized by all Delta inverters allow the units to run reliably in this challenging environment filled with dust and often beset with high ambient temperatures.

2,058 solar modules were installed onto the plant rooftop and 15 Solivia 30 TLs plus 1 Solivia 20 TL were mounted inside concrete utility buildings in the vicinity of the processing plant.

According to the Head of Solar and Biomass Projects at Renesis, Orçun Leblebici, "The Delta Solivia inverters were selected because our partner company Abakus Solar AG had made a recommendation to us based on their positive experiences in the past with them. It was also important to our selection that the Delta inverters offer high overload capability in a reasonably priced package and feature wide MPPT voltage ranges."

With the PV system in operation since May 2014 the environmental benefits have become quite evident. Annually the company is saving 400 tonnes of CO2 while also producing 760,000 kWh of clean electrical power.

Renesis and Delta had good collaboration on the project and look forward to working together on more PV systems within the growing PV market in Turkey. Delta was proud to be able to supply solar inverters that meet the high demands for the operations of Esan.

Both firms share similar values focused on sustainable business practices and are able to show that solar generated electricity is not only environmentally friendly but can also be business friendly.

Throughout its history, Delta Group has received many global awards and recognition for its business milestones, innovative technology and corporate social responsibility. Since 2011, Delta has been selected as a member of the prestigious Dow Jones Sustainability™ World Index (DJSI World) for 3 consecutive years. In 2013 it was also included in the DJSI Emerging Markets Index and ranked first in six criteria among DJSI’s World-leading Electronic Equipment, Instrument and Component Companies segment.

Das Finanzministerium in Baden-Württemberg hat kürzlich ein Hinweisgebersystem eingeführt: Damit können Bürger dem Fiskus anonyme Hinweise auf Steuerdelikte melden. Medial und in der Politik sorgte dies für ambivalente Reaktionen. read more
The publisher indicated in each case is solely responsible for the press releases above, the event or job offer displayed, and the image and sound material used (see company info when clicking on image/message title or company info right column). As a rule, the publisher is also the author of the press releases and the attached image, sound and information material.
The use of information published here for personal information and editorial processing is generally free of charge. Please clarify any copyright issues with the stated publisher before further use. In the event of publication, please send a specimen copy to service@pressebox.de.