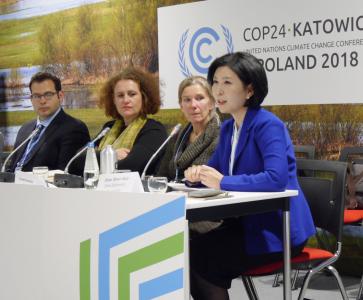 (PresseBox) ( Teningen, 18-12-07 )
Delta, a global provider of power and thermal management solutions, organized an official side event today, at the Katowice COP24 Climate Change Conference in Poland, to reflect on the role of distributed energy resources in advancing the energy resilience of cities. Delta´s perspective as a technology provider was complemented in the event by the contributions of the C40 Cities Climate Leadership Group, the U.S. Green Building Council (USGBC), the American Council for an Energy-Efficient Economy (ACEEE) and the Japan-based Renewable Energy Institute (REI). The executive director of the Delta Electronics Foundation, Mrs. Shan-Shan Guo, highlighted practical cases in which Delta has enabled distributed energy solutions capable of sustaining energy resilience. More than a hundred influential opinion leaders and policy makers from around the world offered valuable views during the event.

While addressing the audience, Mrs. Shan-Shan Guo said, “The main benefits of distributed energy resources technology include demand response, peak shaving and load shifting. Delta’s smart green solutions cover energy storage, building energy management and vehicle-to-home/vehicle-to-grid (V2H/V2G) EV charging that together can enable distributed energy applications to not only enhance the energy resilience of cities, but also to contribute to the net-zero emissions by 2055 target indicated in the latest IPCC Report.”

One of the practical cases of distributed energy resources enabled by Delta and currently enhancing the energy resilience of communities is the green campus of the Namasia Minchuan Elementary School in southern Taiwan. This eco-friendly facility integrates Delta’s solar PV system, energy storage technology and energy management platform to allow for smooth demand response and peak shaving functions, thus, optimizing the benefits of the green power generated. During natural disasters, which commonly cause power blackouts in the area, the Namasia green campus can be powered by its energy storage system to serve as a shelter for the community, with more than an accumulated total of 5,000 people sheltered since its inauguration. The Namasia green campus and its underlying systems for distributed energy resources are being featured at Delta’s exhibition booth at COP24 from December 3 to 7.

Attaining the aforementioned net-zero emission target requires close cooperation between multiple stakeholders. On this occasion, Delta has set the agenda with its side event at COP24, inviting world-class institutions to share their views on energy transition. Ms. Yuko Nishida, manager of the REI’s Climate Change Group, echoed the significant contribution of energy efficiency, renewable energy, and distributed energy in cities. The ACEEE underscored its close teamwork with Delta in issuing a report that explains how to define policies that foster low-carbon transportation and buildings in certain cities in the U.S.A. In addition, the USGBC emphasized the value of net-zero energy building standards and the role of distributed energy resources therein. Lastly, C40 offered the audience cases in which cities across the globe have successfully taken substantial climate action.

Delta has participated in the UN Climate Change Conference for twelve consecutive years. In its 2015 edition, COP21, held in Paris, France, Delta held its Green Building Exhibition at the Grand Palais, while its CEO, Mr. Ping Cheng, and its chief brand officer, Mrs. Shan-Shan Guo, joined world renowned experts in a roundtable event in the German Pavilion. In 2017, ICLEI (Local Governments for Sustainability), invited the Delta Electronics Foundation to share its experience in carbon reduction initiatives. This year, Delta Electronics Foundation led again the organization of an official side event to highlight how technology fosters lower carbon emissions.

Delta, founded in 1971, is a global provider of power and thermal management solutions and a major player in several product segments such as industrial automation, displays, and networking. Its mission statement, "To provide innovative, clean and energy-efficient solutions for a better tomorrow," focuses on addressing key environmental issues such as global climate change. As an energy-saving solutions provider with core competencies in power electronics and innovative research and development, Delta\'s business domains include Power Electronics, Automation, and Infrastructure. Delta has 169 sales offices, 70 R&D centers and 38 manufacturing facilities worldwide.

Throughout its history, Delta has received many global awards and recognition for its business achievements, innovative technologies and dedication to corporate social responsibility. Since 2011, Delta has been listed on the DJSI World Index of Dow Jones Sustainability™ Indices for 7 consecutive years. In 2017, Delta was selected by CDP (formerly the Carbon Disclosure Project) for its Climate Change Leadership Level for the 2nd consecutive year.