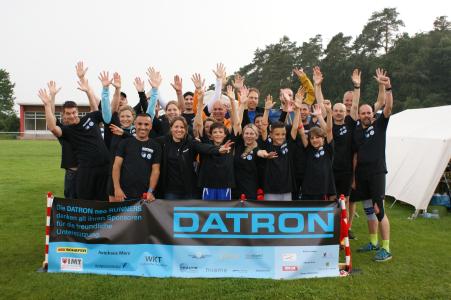 (PresseBox) ( Mühltal, 16-07-05 )
The DATRON AG, an internationally successful engineering specialist from Mühltal-Traisa near Darmstadt, started on 11 and 12 June together with first German soccer division's SV Darmstadt 98 as "DATRON neo RUNNERS" at the local “24 hour run.” The team ran "In the Sign of the Lily", for the "heart screening for newborns" initiative to provide muscle strength and thereby collect donations. With striking 674 laps, the „DATRON neo Runners" achieved position 9 in the ranking. At the same time, DATRON made the top of the donors list with eventually € 10,000 in donations.

A total of 23 teams accepted the invitation of the organizing sports club SV Traisa and took off on Saturday evening at 6.00 p.m. sharp to run for 24 hours – in severe weather conditions, yet with great enthusiasm – lap after lap on the local sports field. The "DATRON neo Runners" were employees of DATRON AG, of SV Darmstadt and the latter’s fans, who had won their starting positions during a social media drive on facebook.

The charity event, supporting the prevention initiative of the Darmstadt pediatric cardiologist Dr. Elmo Feil, was the ideal occasion for a sports activity of DATRON AG together with the SV Darmstadt 98. Since 2015, DATRON AG has been a partner of the Social Campaign "In the Sign of the Lily" and annually runs a common social action with the first division football club. At the “24 hour run” sprinters of all ages joined their strengths to help the early detection of heart defects in newborns. The sponsoring sum that the DATRON neo Runners reached with 674 team laps was rounded to a total of € 10,000 by DATRON AG. Overall, the teams participating in the 24-hour run in accumulated 14,909 laps together and donated € 38,000 for the good cause.

The CEO of DATRON AG, Dr. Arne Brüsch, who also ran several laps, was delighted with the result: "As an integral part of the Mühltal community, we feel a social responsibility for our environment. We believe it’s our duty to strengthen the weakest. Projects relating to children and young people are particularly valuable to us, and the "heart screening for newborns" initiative for many parents and friends among the staff is a real labor of love.

Oliver Keller, Head of Sales of the SV 98 soccer club, also started for "DATRON neo Runners" and gave a very positive feedback on the event: "It is nice to see that such a large number started for our social campaign. The donation goes to a great project, because health care cannot start early enough. A big thanks to DATRON AG, which proves to be a strong partner in organizing the runners smoothly and for increasing the donated sum so generously.

DATRON machines are characterized by a high quality and efficiency at very low power consumption. DATRON systems, among others, are used in electrical engineering, metal, plastic and automotive industries, aviation and in dental technology. Over 2,000 machines customers, domestic and foreign, trust in the proven DATRON technology.

DATRON has been on a profitable growth path for years. Thus, sales of around EUR 42.6 million were achieved with more than 25 sales partner worldwide in 2015. Currently, DATRON employs around 240 People. The company has received many awards during recent years. The consulting firm Munich Strategy Group (MSG) ranks DATRON among the most innovative SMEs in Germany (DATRON achieved position 30), published in an independent study at the end of 2015, and further ranked DATRON as a TOP 100 company. Most recently DATRON AG received the "Customer Champion 2016" award at the end of April.

Further information can be found at www.datron.de