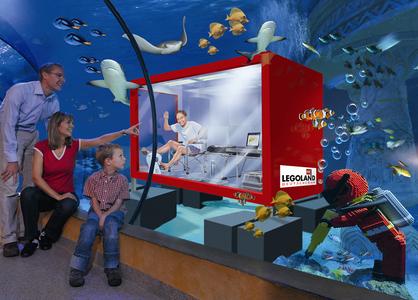 (PresseBox) ( Regensburg, 10-03-08 )
From March 30th to April 13th, 2010, a spectacular Guinness World Records attempt will take place at the LEGOLAND® Deutschland leisure park in the German city of Günzburg. Australian marine biologist and adventurer Lloyd Godson plans to spend 14 days, living in a four square metre house submerged at the underwater world at "LEGOLAND ATLANTIS by SEA LIFE". His goal is to generate the largest amount of electricity ever produced by riding a bicycle underwater. A Dallmeier camera will monitor everything and transmit the record attempt via the internet. Additionally, the images are stored on a Dallmeier recorder for later evaluation.

For his world record Lloyd Godson uses a maximally technically downgraded bicycle. Godson will have to pedal hard in order to generate 2,500 watthours in 14 days and to thus generate the largest amount of electricity ever produced by riding a bicycle underwater. An official Guinness World Records arbitrator will confirm this record on April 13, provided Godson succeeds.

The house Lloyd Godson will move into on March 30 measures 2.50 x 1.60m. That small floor area will have to suffice for the 32year old, who will have to eat, sleep and wash himself within the limited space. Further space in the house is occupied by a compact Dallmeier box camera, various measuring instruments and a computer. Using the computer Godson will communicate with the outside world via the www.LEGOLAND-Unterwasserrekord.de homepage. The camera images will also be transmitted online by a MicroStreamer. So not only the approximately 1,300 fish in the Ocean Tank, which is filled with 535,000 litres of water, and marvelling visitors will be able to watch Lloyd Godson live.

For subsequent evaluations and to provide clear evidence of the fact that Godson has not left the small underwater house during the record attempt, the images will be recorded on a Dallmeier DIS-2/M StreamerPro HDD Large. "It was very important to me to have a reliable recording of my stay underwater so that my attempt at the world record would be clearly verified. During my search for a suitable camera and recording solution I was recommended to use Dallmeier because of the high quality of their products", Lloyd Godson explains. The recording includes audio, which, although not required by Guinness World Records, can be helpful with subsequent analyses following the stay. The project will be accompanied by numerous researchers and scientists. The surveillance of Godson's vital functions is expected to yield new insights about the effects of a longterm underwater stay. The measurements are closely related to research conducted by Dennis Chamberland, a bio engineer with NASA. The results of Lloyd Godson's underwater stay should provide valuable information that will contribute to the establishment of permanent underwater colonies. The international association of diving medicine physicians, the Divers Alert Network (DAN), will also participate with a scientific study. Among other issues, the flow characteristics of body fluids are to be examined. The results are meant to increase the safety of sport diving in the long term.

LEGOLAND® Deutschland was opened on 17 May 2002 in the German city of Günzburg and is amongst the most frequented leisure parks in the country. Action, fun and adventure are in store for visitors. Across eight themed areas with over 50 extraordinary attractions, live shows and workshops give every visitor the chance to fill the role of a true hero and become a pirate, princess or race car driver. No matter if it's a venturous canoe ride as part of the jungle X-pedition or a wild water fight, everybody decides for themselves what kind of adventure they want to experience. 2010 is dominated by the "Year of Records". Ginormous big, microscopically small, utterly weird or just simply unbelievable – one superlative is immediately followed by another. The LEGOLAND holiday village offers overnight accommodation directly at the park. The park belongs to the Merlin Entertainment Group, which is the world’s second largest operator of visitor attractions with a total 38 million visitors per year.

Dallmeier has at its disposal more than 25 years of experience in transmission, recording as well as picture processing technology and is an outstanding pioneer of CCTV/IP solutions worldwide. This profound knowledge is used in the development of intelligent software and high quality recorder and camera technologies enabling Dallmeier to not only offer stand-alone systems, but complete network solutions up to large-scale projects with perfectly integrated components.

Right from the beginning the company always focused on own innovative developments and highest quality and reliability. Dallmeier is the only manufacturer in Germany that develops and manufactures all components on its own. This includes the entire product range, from cameras to picture storage and transmission to intelligent video analysis and even individually adjusted management systems. Quality made by Dallmeier, made in Germany! This and the extensive experience in the CCTV and IP field have lead to a top position in the international market for digital video surveillance systems.