Convergence Area demonstrates the interaction of physical security, IT security and data protection 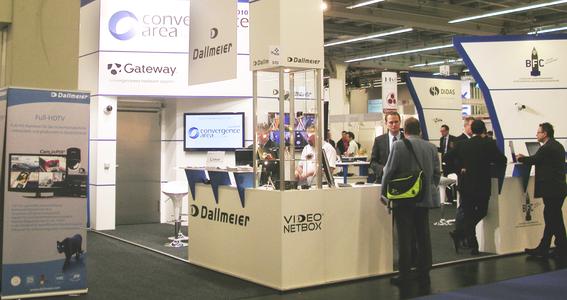 (PresseBox) ( Regensburg, 10-10-22 )
On a large collective stand nearly 200m2 in size, Dallmeier together with other partners in the Convergence Area, showed how physical security solutions can be cleverly linked with IT security components. The convergence of building technology, building security, video surveillance and information security was demonstrated at an unprecedented scale.

The interaction of individual systems was explained using a clear example: The hiring of a new employee in a firm. The visitors to the stand registered as "new employees". High resolution Dallmeier cameras took photos of the "employees", who within a few minutes received their own fully personalised company pass. These served as keys for lots of other demonstrations, e.g. the event-controlled video surveillance of crucial building zones, the opening of entrance doors, the automatic presence checking when entering sensitive data or the ID card-based release of documents to the printer.

Sebastian Rohr, Technology Manager/CTO at accessec and person in charge of the co-ordination of the Convergence Area explains: "A particular aspect of this convergence is the integration of video technology. That means in any place you wish to survey in detail, video technologies are capable of carrying out event -based recordings. Metaphorically that means: If an employee or a previously unknown person tries to break into your building or into specially secured areas using a pass; the video technology will be triggered at that moment: PTZ cameras for example start up automatically from a defined preset position, are activated and start the recording."

Furthermore, card technology is also widely used in the IT sector. For example when an employee physically signs into a part of the building, they then have authorisation to log on to a PC in that area. If the ID card is removed from the computer, it will be locked. If the employee then goes to another area of the building, they can - triggered by the physical security - log on again in this new area. If they now go back to their previous workplace, but a colleague keeps the door open and they themselves do not trigger the building technology with their pass, then the system would not know, that they had changed areas of the building and they would have no access to the IT system. The advantage of a solution such as this, is that the employees cannot swap passes with one another, and for example cleaning staff or third parties are not capable of obtaining access to IT and sensitive data with the passes.

Sebastian Rohr returns once more to the theme of video surveillance: "It is of course very interesting, that exactly in these unsuccessful attempts to log onto information technology systems, there is in turn the opportunity to start dedicated video recordings. Here you see the entire scope of a completely planned and executed convergence solution, which spans from the entry into the building, to time registration and video surveillance, and towards an integrated card life cycle management."

The integration of different sectors happens over the collective interface standard ONVIF (Open Network Video Interface Forum) - thereby this standard was used for the first time outside of the video sector. Sebastian Rohr said: " We have the opportunity to link together lots of other sectors, which until now were not integrated, because the system is based on an open standard. This open standard is supported by all the members of the Convergence Area 2010. With this, we eventually establish a new industry movement in physical building security towards more openness, more standards and more interoperability, in order to make simple integration of individual system components possible, for you the customer."

Dallmeier has actively participated in the development of ONVIF standards as a "contributing member" since 2009.

Anybody who already owns a Dallmeier IP camera, can subsequently upgrade it to achieve ONVIF conformity!

Dallmeier has at its disposal more than 25 years of experience in transmission, recording as well as picture processing technology and is an outstanding pioneer of CCTV/IP solutions worldwide. This profound knowledge is used in the development of intelligent software and high quality recorder and camera technologies enabling Dallmeier to not only offer stand-alone systems, but complete network solutions up to large-scale projects with perfectly integrated components. Right from the beginning the company always focused on own innovative developments and highest quality and reliability. Dallmeier is the only manufacturer in Germany that develops and manufactures all components on its own. This includes the entire product range, from cameras to picture storage and transmission to intelligent video analysis and even individually adjusted management systems. Quality made by Dallmeier, made in Germany! This and the extensive experience in the CCTV and IP field have lead to a top position in the international market for digital video surveillance systems.