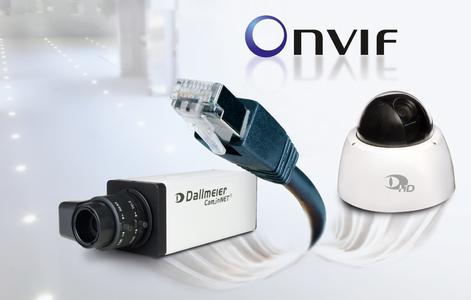 (PresseBox) ( Regensburg, 10-03-09 )
Since August 2009, Dallmeier has been a "Contributing Member" to ONVIF and meanwhile all Dallmeier IP cameras have successfully been tested for ONVIF compatibility.

The Open Network Video Interface Forum, short ONVIF, aims at creating a global interface standard for networked video products. Such a standard makes it possible to jointly use devices from a variety of manufacturers in one system.

"For many years, we have been relying on open interfaces as well as integration possibilities of and into thirdparty systems. So it was a logical move for us to join ONVIF", Dieter Dallmeier explains. As a contributing member Dallmeier is able to actively participate in the development of the standard. "We have in the meantime integrated the ONVIF specifications with all our network cameras. It is already planned to implement them with other products", says Dieter Dallmeier.

All Dallmeier IP cameras support the ONVIF standard. Ranging from the network box camera DF3000IP-PoE and the vandalresistant DDF3000IPV dome camera up to the IP PTZ series DOMERA® (DDZ30XX-YY/HS/IP). Good to know: Anybody who already owns a Dallmeier IP camera can subsequently upgrade it to achieve ONVIF conformity! The MicroStreamer-PoE, a onechannel audio and video streamer in a very compact housing, is also based on the open interface standards of the Forum. Thereby, also (already existing) analogue cameras can be integrated easily into video network systems, meeting the requirements of the ONVIF standard.

All products have successfully undergone the conformity test which is carried out using a tool provided by ONVIF. Dallmeier was also represented at the Developers' Plugfest which took place from 23rd to 26th February in Stuttgart, Germany, and thoroughly tested cooperation with other ONVIF members. The company also plans to participate in the Plugfest in March, which will be held on the occasion of the ISC West, the International Security Conference and Exposition, in Las Vegas.

As Director Software Development with Dallmeier, Norbert Niggemann is substantially responsible for the implementation of the ONVIF specifications. He illustrates Dallmeier's approach: "During the implementation of the standard we could already rely on existing interfaces. Apart from the cameras, receiving units such as our DMS or VNS series will soon be compatible."