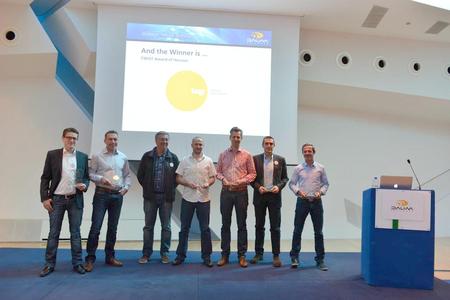 (PresseBox) ( Kehl, 14-04-01 )
DALIM SOFTWARE, makers of highly efficient, scalable software solutions for the creation, production and management of cross-media content, announces that its annual EuroDUO event, held at the Grand Hotel di Como, Italy, was a success, attracting graphic arts professionals, brands, retailers, institutions and their respective marketing and communication supply chains from more than a dozen countries, from March 20-21, 2014.

EuroDUO is the premier opportunity for DALIM SOFTWARE users, industry influencers and pioneers alike to learn about new technologies as they are being applied in a global context, and understand how emerging work practices impact media and communication businesses. In addition, EuroDUO gives attendees the opportunity to learn about industry trends, the company's most recent developments, and business opportunities. It also offers attendees the chance to meet with key players from around the world, plus the opportunity to discuss with the DALIM SOFTWARE technical and international sales staff.

A EuroDUO meeting would not be complete without highlighting a review of ES 4, TWIST 7 and DIALOGUE Engine 4 feature enhancements available since their launch last December. This included:
Celebrating twenty years of TWIST
TWIST, DALIM SOFTWARE’s award-winning production automation workflow software, introduced in 1994 at Seybold Seminars in San Francisco, is celebrating its 20th anniversary. TWIST, enjoying extraordinary product longevity in its software category, was the industry’s first Enterprise-level automated premedia workflow engine—and continues to evolve to serve customers in various media in the future. It utilizes a unique a scalable system to interconnect different tasks with a visual GUI system. For years, some of the industry’s most recognisable companies—IKEA, Airbus, Burda Druck, Hearst, Pierre Fabre, the Council of Europe—have placed their trust in TWIST to provide high throughput, reliability and flexibility in demanding content production environments. They gain significant performance with features such as the ability to build an almost infinite variety of output file formats along variable processing paths; a very extensive modular feature set; and automation of repetitive tasks such as preflighting, file optimization and conversion, colour management, and trapping, to name a few.

To celebrate the occasion, DALIM SOFTWARE held an award ceremony to honour key TWIST users in Europe. They included:
“IKEA, a DALIM SOFTWARE customer, was the first to make us aware of the upcoming 20th anniversary of TWIST. It triggered the idea to include a series of Awards into the EuroDUO conference agenda,” comments Carol Werlé, DALIM SOFTWARE CEO. “EuroDUO offered two days of informative insight helping influencers and users to make decisions that build business and drive profitability. It also gave everyone the opportunity to network and share ideas—and most important, allowed us to learn from our users in the stunning setting of Lake Como. We thank our sponsors, Hyphen-Italia, Epson Germany, and Gaficon for their support. We’re already looking forward to next year’s event in Barcelona.”

Since 1985, the world´s most prominent publishers, publication printers, agencies and brand owners can be found among our customers, as well as a variety of quality- and service-oriented premedia companies and printers of all sizes. They all utilize our innovative technologies to the fullest extent.