Industrial Internet of Things in Industry 4.0

The IIoT drives the industry 4.0 because it provides previous lifeless objects to suddenly have a voice 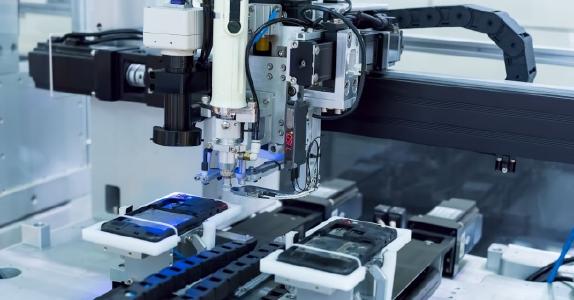 (PresseBox) ( Dresden, 16-07-06 )
So far in our quest to decipher the Industry 4.0, we have established that the new industrial revolution is knocking on the door and has the capability of completely changing the manufacturing landscape, to become far more efficient, flexible and smart.

We have also established that the I4.0 is being ushered in by the combined impact of new disruptive technologies and digitization of manufacturing plants and supply chains. One such technology we recently examined was 3-D printing, which alone is capable of taking manufacturing to the next level.

First let’s get to grip what exactly the IoT is, and why it should garner so much attention to begin with.

Internet can be simply viewed as a platform which provides connectivity between computer systems across the world. It allows for transfer of data to and from devices, irrespective of their location. The internet of things goes a step further and connects other objects, a truly fascinating and wide array of objects, through the same platform, which previously weren’t perceived as being able to communicate through the internet.

Miniaturization of sensors along with their capability of being IP enabled has allowed the simplest of objects, which possesses a smart internet enabled sensor, the ability to communicate with other objects through the internet.

So what potential do "talking devices" have?

...and why should manufacturers be interested in objects which can communicate? Where is the ‘value’?

The Internet of Things allows any and all inanimate objects to suddenly have a voice, which basically in more professional terms would mean that objects can now transmit information, not just to their human ‘controllers’, but to other objects as well. It is a well-known fact that robots are gaining popularity in almost all manufacturing segments, especially the automotive industry. These robots are now more capable of doing complex tasks, which are not merely repetitive in nature. What is making these robots more capable is the fact that they can communicate with each other and thereby synchronize to execute a particular operation which is incremental in nature.

How IoT becomes the leading driver of I 4.0

The IIoT goes beyond communicating robots as it allows even materials to communicate with other materials; allows process equipment to schedule their own maintenance; allows ready goods to schedule shipments. And all this happens because there is a two way communication between previously inanimate objects, which needed manual input for processing.

Traditionally, human operators would perform operations and schedule activities based on their assessment of the equipment, material and so on. What has changed now is the fact that the equipment, the material and even the product, now provide or are capable of providing inputs to the operator or to the next equipment in the production line, as to what is their current status, whether or not they are ready for an operation, whether they need attention or there has been an out of spec incident.

The ability of objects has increased because of their connectivity with the internet and has formed a sort of Cyber Physical World, where any physical world entity generates information and is connected to other objects on the physical world through the cyber web.

For manufacturers it is a dream come true. Imagine the impact to process orchestration when smart materials equipped with sensors trigger themselves to be moved to a particular production line by the warehouse robots. Once on the production line, each component communicates with the equipment and confirms/conforms to the requisite specs. The equipment, housed with actuators and controllers, performs the said operation. And the smart material then progresses into the next step.

The possibilities for manufacturers are limitless

What is fascinating is that these self-orchestrated production plants would be highly efficient due to the fact that they generate massive amounts of data, as each material, each piece of equipment can communicate. It is this information, which when harnessed and used to monitor/control the flow through most modern MES/MOM applications, would allow process owners to generate value through flexibility, proactive corrective/preventive/predictive action, better maintenance, faster product roll outs and more synchronized value chains.

The possibilities at this point of time are simply limitless, subject only to the level of digitization a manufacturer can envision and implement with the help of capable vendors.

Word of caution here: IIoT is not just devices with embedded electronics communicating over the Internet. It requires smart software applications to capture and analyze the data generated and communicated between the devices. Otherwise the synchronization and orchestration discussed above can never be achieved.

ERP and MES applications will need to adapt and become capable of making sense of the massive amounts of data which would be generated in future from these talkative gadgets, gizmos and machines. This is where other Industry 4.0 enablers like cloud computing, big data analytics etc. come into the picture.

The IIoT drives the industry 4.0 because it provides lifeless objects, incapable of any intelligent or conscious behavior to suddenly have a voice. It enables manufacturing to become more precise, more orchestrated, more flexible and more proactive in every sense. I4.0 is all about the ability to produce customized goods, faster and cheaper than ever before at an alarmingly high quality standard. IIoT enabled objects and capable software are a must for I4.0 vision to become a reality of things to come.

Next time we’ll explore another such technology enabler: Mobile Devices and their application and relevance to I4.0. Stay tuned!

Critical Manufacturing empowers high performance operations for some of the most advanced manufacturers worldwide with innovative software technology and advanced services. Its new generation Manufacturing Execution System (MES) is an Industry 4.0 centerpiece, incorporating all necessary integration, mobile, connectivity and logical decentralization features. This deep, unified system increases performance, control and quality for complex manufacturing operations. The company is part of the Critical Group, a private group of companies founded in 1998 to provide solutions for mission and business critical information systems.