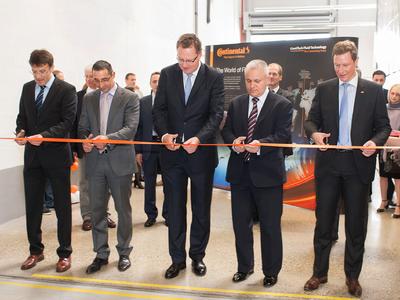 (PresseBox) ( Hannover, 13-06-03 )
After a construction time span of just nine months, Hanover-based ContiTech AG has inaugurated a production plant for hose lines in northern Serbia. Since October 2012, the plant has already been supplying customers in the auto industry. In the meantime, the site employs around 150. The head count is expected to climb to 250 by year's end.

ContiTech invested more than ten million euros in the new facility. Certified to all required quality standards, the plant expands the production capacity of hose line specialist ContiTech Fluid Technology, a ContiTech business group. Subotica assembles hose lines for the powertrain and supplies these to European automakers. Each year, the plant produces a grand total of 1.8 million units, broken down into around eighty different parts.

Citing one of the location's major advantages, Matthias Schönberg, head of the ContiTech Fluid Technology business group notes: "Subotica offers an excellent logistical hookup to our customers. Further advantages are a local labor market that offers just what we need and close proximity to sister plants in Szeged, Hungary, and Timișoara, Romania."

There is enough room to eventually expand further on the plot in the bonded zone in the Mali Bajmok industrial park. The production hall originally erected there measures 7,200 square meters (77,500 sq. feet).

ContiTech Fluid Technology produces hose line systems for the auto industry as well as for the plant and machine engineering, oil production and numerous other industries. In 2012, its over 14,000 employees realized €1,360 million in sales.

In 2009, ContiTech previously purchases the Serbian conveyor belt company Kolubara Univerzal and has since produced conveyor belts in Veliki Crljeni, south of Belgrade, for the Central and Eastern European market.

With sales of €32.7 billion in 2012, Continental is among the leading automotive suppliers worldwide. As a supplier of brake systems, systems and components for powertrains and chassis, instrumentation, infotainment solutions, vehicle electronics, tires, and technical elastomers, Continental contributes to enhanced driving safety and global climate protection. Continental is also an expert partner in networked automobile communication. Continental currently has approximately 173,000 employees in 46 countries.

The ContiTech division numbers among the leading suppliers of a host of technical rubber products and is a specialist for plastics technology. The division develops and produces functional parts, components and systems for the automotive industry and other important industries. ContiTech has a workforce of approximately 28,000 employees. In 2012, it achieved sales of about €3.7 billion.