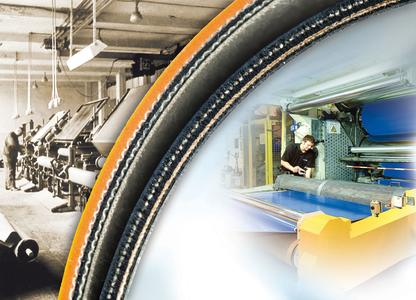 (PresseBox) ( Hanover/Northeim, 11-06-06 )
2011With trail-blazing processes and a research and development ever geared to the future, ContiTech has shaped the printing blanket branch for a century. With the two brands - CONTI-AIR® and PHOENIX Xtra BLANKETS - the company has established itself as one of the world's key manufacturers.

Whether with the development of the first elastic printing blanket in 1911, the trail-blazing blowing manufacturing process for compressible printing blankets (registered for a patent in 1961), the debut of the CONTI-AIR® brand in 1969 or the world's first ever climate-neutral printing blankets in 2010 - printing blankets from ContiTech have continually and sustainably established themselves on the world market. As an internationally prominent manufacturer in this sector - and the sole German one - the company is now marking its 100th anniversary as a printing blanket producer.

The past 100 years have shown that ContiTech has always had a future-oriented and forward-looking mindset. It has thus built up its strong position," says Heiko Eymer, head of the ContiTech Elastomer Coatings business unit. "In the last few years in particular, a lot has happened in the printing industry. In 2005, for example, ContiTech acquired the PHOENIX Xtra BLANKETS brand. This made it one of the largest printing blanket manufacturers worldwide. The two brands have different focal points, so they complement one another excellently."

The milestones in printing blanket development

Milestones in printing blanket development characterize the history of success: And so ContiTech - at the time under the Continental name - took part in the first drupa printing blanket trade show and went on to expand its range three years later. Registered for a patent in 1961, the special blowing process revolutionized the branch. It did this by producing closed micropores filled with overpressure in the compressible layer. The innovation made it possible to exactly define and control compressibility and resilience. The result: a unique, uniform printing surface.

In 1979 printing blanket production moved from Hanover to Northeim and production was expanded. With the help of calenders, it has been possible to produce double-width printing blankets since 1996. Three years later ContiTech filed for a patent on metal printing blankets. It is the leader in this product area. In the period thereafter, the company enlarged the scope of its business in Asia and founded the ContiTech Printing Blanket service center in Shanghai in 2001. Since 2010 the service center in Singapore has, for its part, been supporting the involvement in Asia.