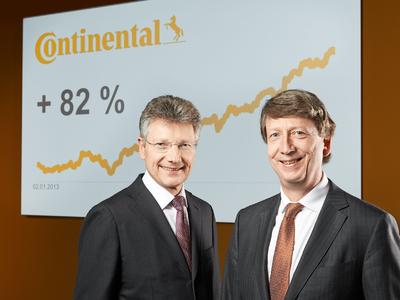 
The Continental Corporation demonstrated strength and again significantly increased its room to maneuver in 2013. It managed to do so despite a weak European automotive markets and negative exchange rate effects of a considerable magnitude. In 2014 the international automotive supplier, tire manufacturer and industrial partner expects markets to develop positively in North America and Asia, as in the previous year. Expansion of business is planned for China in particular. What is even more, Continental intends to use the agreed purchase of the plastic and rubber specialist Veyance Technologies, Inc. to bolster its non-automotive industrial business.

"In 2013 we achieved very good results and continued to pursue our goals reliably, rigorously, and efficiently. Looking back, we achieved more than anticipated overall. We once again generated a high level of profit of more than €1.9 billion, or €9.62 per share. The free cash flow amounts to more than €1.8 billion, allowing us to reduce net indebtedness by a further billion euros. At the end of 2013, the gearing ratio stood at 46 percent, its lowest yearend level since 2006," said Continental's CEO Dr. Elmar Degenhart on Thursday in Frankfurt/Main. He was speaking on the occasion of the presentation of the provisional figures at the corporation's annual financial press conference. "We continued to invest heavily in property, plant and equipment, software and R&D. At the same time, we persistently created the scope for an acquisition worth well over a billion euros."

Degenhart pointed out to journalists that in 2013, Continental shares were at the top of the DAX for the second time in a row, with a share price increase of 82 percent. "In addition our shareholders are to participate, as in the previous year, directly in the company's success. We want to pay out a dividend of €2.50 per share and shall submit a corresponding proposal. Calculated on the basis of the €9.62 earnings per share, this works out to a payout ratio of around 26 percent and therefore a slight increase over the previous year's level," said Degenhart.

In 2013 the Continental Corporation increased sales 1.8 percent to €33.3 billion. Adjusted for negative exchange rate effects in the order of €800 million and changes in the scope of consolidation, this worked out to an increase of 4.0 percent. The EBIT climbed by 2.4 percent to close to €3.3 billion. The EBIT margin was thus 9.8 percent, following 9.7 percent in fiscal 2012. Adjusted EBIT - in particular for depreciation and amortization due to acquisitions and for special effects - rose 3.5 percent to over €3.7 billion. This corresponds to a ratio of 11.3 percent after 11.0 percent the year before.

Continental bolstered its equity by more than a billion euros. This brought about an improvement in the equity ratio from around 30 percent to almost 35 percent. "We are therefore well above our targeted minimum level of 30 percent," said Degenhart.

Since the end of 2012, the corporation's net indebtedness dropped by around €1 billion to €4.3 billion. The gearing ratio thus improved significantly year-on-year to 46 percent after roughly 65 percent at the end of 2012. "Although our net indebtedness still exceeds that of our key competitors, we are continuing to pursue the goal of a prudent strengthening of our business outside the automotive industry - possibly through additional acquisitions in the non-automotive industrial sector, but also by means of continuous expansion of our replacement tire business," said Degenhart.

The reduced net indebtedness and the improved loan and bond conditions will have a significant positive impact on the Continental Corporation's net interest expense. "For the current fiscal year we are forecasting net interest expense of less than €400 million," said CFO Wolfgang Schäfer. Net interest expense in 2013 was slightly over €800 million. "The increase of €300 million vis-à-vis 2012 resulted primarily from non-recurring effects in connection with the early repayment of the four bonds issued in 2010: This gave rise, firstly, to non-cash valuation losses, and, secondly, to premium payments in the order of €110 million for early bond redemption," explained Schäfer.

Free cash flow for fiscal 2013 amounted to €1.8 billion. "As in the previous year, the further increase of €166 million was considerably higher than we had expected," explained Schäfer, adding that this was partly thanks to the continuous and successful improvement of the working capital ratio. For 2014, Continental is planning on free cash flow of at least €1.2 billion before acquisitions.

In 2013, Continental again made considerable investments in research and development, with expenditure amounting to just short of €1.9 billion. This is equivalent to 5.6 percent of sales, following 5.3 percent in the previous year. "The €1.9 billion is the highest level ever in the company's history. We are among the most innovationstrong companies on the German blue-chip index, the DAX. In the past year, we once again invested around €2 billion, moreover, in property, plant and equipment and software," said Degenhart.

The positive business performance is also reflected in the growing number of employees: At the end of 2013, the Continental Corporation had around 178,000 employees, roughly 8,000 more than the year before. The jobs were created mainly in the growth markets.

"Overall, we are confident as regards the outlook for fiscal 2014. We expect the market for passenger cars, SUVs and light commercial vehicles to rise by 2 percent. We have therefore set our-selves the goal of growing by 5 percent and thus increasing total sales to around €35 billion. We again anticipate substantial negative exchange rate effects, which, however, should not hurt our profit margin," recapped Degenhart.

He added: "We expect to comfortably achieve an adjusted EBIT margin of more than 10 percent. In the Automotive group, we are planning a sales growth of about €21 billion in the current fiscal year, while the Rubber group will up sales to roughly €14 billion, not taking into account the acquisition of Veyance Technologies, Inc."

With provisional sales of around €33.3 billion in 2013, Continental is one of the world's leading automotive suppliers. As a provider of brake systems, systems and components for powertrains and chassis, instrumentation, infotainment solutions, vehicle electronics, tires, and technical elastomers, Continental contributes to enhanced driving safety and global climate protection. Continental is also an expert partner in networked automobile communication. Continental currently employs around 178,000 people in 49 countries.