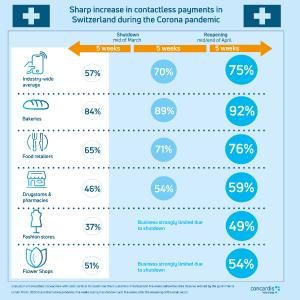 (PresseBox) ( Wallisellen, 20-08-13 )
The credit card is being used increasingly frequently in Switzerland – and more and more people are using it for contactless payments. Compared to 2015, contactless transactions by credit card have increased 6.8 times. Over the same period, sales involving contactless credit card payments have increased by a factor of 13. Neobanks in particular – i.e. direct banks that offer their services exclusively online – are accelerating this major trend. Among other findings this is clearly shown by the issue of Swiss Payment Monitor published today by Zurich’s University of Applied Sciences and the University of St. Gallen.

The data of the representative study was collected at the end of 2019 and thus before the Covid-19 pandemic. As one of the leading payment service providers in Switzerland and the entire DACH region, Concardis has analysed the transaction figures of its affiliated merchants before, during and after the state-ordered shutdown.

The analysis shows that the results of the Swiss Payment Monitor survey are not only reflected in practice, but that the contactless rate there has reached a completely new level since the pandemic: "The trend towards more contactless credit card payments, which has been continuing for years, was rapidly accelerated by the Covid pandemic: within only three months the proportion of contactless credit card transactions in Switzerland rose from 57 percent to just under 75 percent," says Marianne Bregenzer, Country Manager Concardis Schweiz AG.

This means that three out of four credit card payments are now implemented contactlessly. Individual sectors such as food retailing or bakeries even exceed this rate (76 percent and 92 percent respectively).

Contactless rate continues to rise even after easing
During the shutdown imposed in Switzerland in mid-March due to the Covid pandemic, in those stores that remained open the proportion of contactless payments rose rapidly. The figures after the shutdown show that this is not a short-term precautionary measure on the part of consumers: "After the retail trade was allowed to gradually reopen from the end of April, the figures show that this behaviour has become a habit and the proportion of contactless transactions is even rising further," says Bregenzer.

Even in those sectors where contactless payment tended to be less common over many years, frequently the sole method of payment is now the smartphone or card held in front of a card reader: in clothes shops, for example, around half of all credit card payments are currently processed contactlessly – before the state-ordered closures the figure was only 37 percent.

New payment behaviour is already normal everyday life
"In the Nets Group, we are familiar with such a level of contactless transactions from the Nordic countries, where this has been part of everyday life for years," says Bregenzer and adds: "Now this payment behavior is also becoming more firmly established in Switzerland and the entire DACH region and is part of the New Normal," says Bregenzer.

The results of the Swiss Payment Monitor survey show that even before the pandemic, the image of the credit card was already on the rise and reservations about contactless payment were decreasing. However, it is already becoming apparent that in 2020 this process has moved forward by leaps and bounds – exactly how will be shown by the results of next year’s Swiss Payment Monitor.

Concardis is a leading provider of digital payment solutions with 1,100 employees and more than 116,000 customers in Germany, Austria, Switzerland and south-eastern Europe. As part of the Nets Group, a leading payment service provider in Northern Europe, we work on the future of payment transactions. We enable merchants, service providers and financial institutions to benefit from the digitalisation of payment and business processes. Whether smooth payment at the bricks-and-mortar point of sale, flexibly adaptable solutions for e-commerce and m-commerce, or supplementary services with real added value: our innovative products and services reduce complexity, make payment easy and accordingly improve the customer experience.