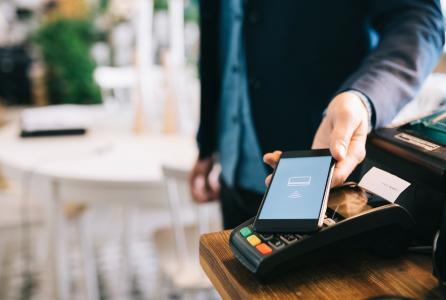 (PresseBox) ( Eschborn, 20-07-29 )
Contactless payment is establishing itself in the DACH region after the reopening of bricks-and-mortar retailing. During the shutdown imposed in Germany, Austria and Switzerland in mid-March due to the Covid-19 pandemic, in those stores that remained open the proportion of contactless payments rose rapidly. After the retail trade was gradually allowed to reopen from the middle of April onwards, the figures show that this trend has been consolidating and the contactless rate is continuing to rise: in the five weeks following the reopening around 70 percent of the cashless transactions registered by Concardis merchants were contactless. "When cashless payments are made, most of them are now contactless – across all sectors," says Robert Hoffmann, CEO of Concardis and Nets Merchant Services. Before the shutdown a little more than half of the cashless payments were processed contactlessly.

"Our analysis shows very clearly that new payment practices are very much part of the much talked-about ‘new normal’. Within weeks the DACH region has reached a level here that we in the Nets Group know from the Nordic countries, where people have for the most part been paying cashlessly and contactlessly with cards and smartphones for years," says Hoffmann.

How often contactless payments are made continues to vary widely across the individual sectors. In bakeries and food stores, for example, contactless payments were already commonplace before the shutdown (84 percent and 71 percent respectively), and the figures rose again significantly during the pandemic, reaching 93 percent and 77 percent respectively. In drugstores and pharmacies, on the other hand, an average of around 58 percent of transactions were carried out contactlessly prior to the state-ordered measures in March. During the closures in the retail sector this proportion rose to 71 percent, and after the relaxation it increased further to 73 percent.

Contactless rate in shoe shops increases by 14 percent
Retailers who had to close their stores for five weeks after the shutdown switched to e-commerce and other distribution channels to conduct their business. In the case of shoe shops, for example, sales at the cash register also clearly indicate that whereas before the shutdown not even half (47 per cent) of payment transactions were processed contactlessly, the average figure since the stores re-opened is around 61 per cent. The number of contactless transactions in flower shops associated with Concardis also rose significantly, from around 56 to 64 percent.

"This shows very clearly that contactless payment is not only an acute safety precaution for consumers in the pandemic. Customers have also come to appreciate this simple, secure and convenient method of payment, and are continuing to use it wherever card payments are possible," says Hoffmann, adding: "This has made contactless payment the standard payment method for many people in the DACH region, too."

As one of the leading payment service providers in the DACH region, Concardis has evaluated transaction figures from its associated merchants in Germany, Austria and Switzerland. The period under review covered five weeks before the shutdown, five weeks during the shop closures and five weeks after the reopening of the retail sector. The majority of the transactions were made by credit card, with debit cards accounting for around a quarter of the payment transactions surveyed.

Concardis is a leading provider of digital payment solutions with 1,100 employees and more than 116,000 customers in Germany, Austria and Switzerland as well as south-eastern Europe. As part of the Nets Group, a leading payment provider in northern Europe, we are working towards the future of payment. We enable merchants, service providers and financial institutes to take advantage of the digitisation of payment and business processes. Whether seamless payment at stationary points of sale, flexibly adaptable solutions for e- and m-commerce or additional services with true added value: our innovative products and services reduce complexity, make paying simple and thus improve the customer experience.