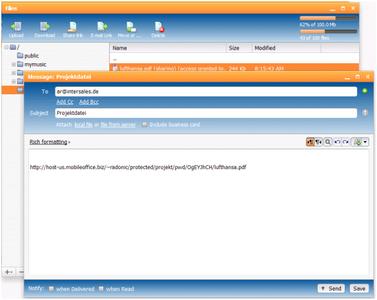 (PresseBox) ( Berlin, 14-03-11 )
Besides e-mail functions, leading messaging systems such as Microsoft Exchange or Lotus Notes have been offering groupware functions, which enable central storing and shared editing of files. As an efficient system for unified communications, CommuniGate Pro does not lag behind its more famous competitors. Their counterpart of public folders is called eDisc.

The need for a main document repository that can be used for exchanging files, contacts or appointments among users, can be seen in the fact, that Microsoft has tried many times to remove public folders out of Exchange. This failed because of the customers' resistance, who were not ready to introduce SharePoint as a supplement as Microsoft had intended.

Integration of the Main Memory with E-Mail

CommuniGate, too, producer of the systems of the same name for unified communications responds to the need for groupware functions. The central document repository is called eDisc, where the existing protocol support allows the access of various clients.

The special value of the public folder concept results from the integration of the groupware functions with the messaging system, so that the data memory is not just another file server. Thus, eDisc can be used directly by most of the applications of CommuniGate. Users can, for example, attach documents of their eDisc repositories to their mails.

The system helps the users also in saving memory space, as they do not have to sent documents as attachment for internal communication - transferring a URL through which the recipient can access the centrally stored data is absolutely sufficient. The Whiteboard of the Conference Module too makes it possible to open files from the eDisc memory and to save them there. Thus, they are directly available to all participants of the conference.

The CommuniGate Server saves the documents together with the remaining user data within the central repository structure, which is generally filed on a dedicated storage system (SAN or NAS). If an enterprise runs the messaging system on its own, all documents remain in its own data centre. Assuming the respective remote access infrastructure, mobile devices too can access it via internet.

This distinguishes eDisc from most of the solutions offered by various manufacturers under the title Enterprise Dropbox. They synchronise data on different end devices, for most of which a cloud service is required. On the contrary, eDisc is based on a central data repository, so that the clients have to get access to the data memory.

All entitled users can access their data in eDisc by using the following methods:

The user can upload files, organize them in repositories and grant access to the files to other users. Anonymous access, too, is possible after disclosure of the respective URLs. Thus, it is possible to provide PDF files or present images as a gallery to a group of people even outside of CommuniGate.

For common file types there are integrated viewers for viewing and playing the files, e.g. in case of images, videos, music files (MP3), HTML- and text files.

CommuniGate eDisc grants authorized users access to the main storage location via the WebDAV protocol. Thus, the eDisc document repository can be integrated to the desktop PC as a drive. Another advantage of this approach: Depending on the authorization, documents can be edited even by several users. However, it has to be considered, that CommuniGate eDisc as well as Exchange Public Folders do not support a versioning of documents.

The WebDAV-URL follows the pattern http://server:port/WebDAV/ and requires a login. Alternatively, users can also use a simple HTLM interface for the file management, which is accessible at the address http://domain.dom:8100/~username/Index.wssp.

The administrator of CommuniGate Pro can grant access to users via ACLs on WebDAV level for repositories or files. Furthermore, he has the possibility to regulate the memory consumption. eDisc supports quotas for each user and can define a maximum number of files and an upper limit for the file size in case of individual users.

Migration of Accounts and Mails from Exchange to CommuniGate Pro