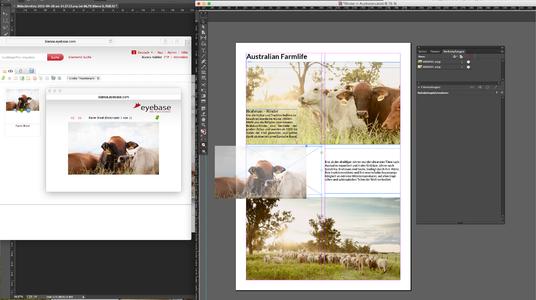 (PresseBox) ( Seefeld, 15-06-29 )
With a market share of 95 percent, Adobe InDesign is a standard tool in the creative industry. However, it has many features, which do not accommodate modern, decentralised teamwork; for example, image data must be available in full resolution on the hard disc in order to be used. In order to prevent chaos in the versioning, eyebase offers a solution by completely merging the image database with Adobe InDesign.

The ability for all creative professionals to access a centrally managed and organised image inventory is the foundation for an efficient and smoothly running production process. As an image databank, eyebase serves more than 250 customers worldwide and is available in 16 languages. Companies use the system to organise their numerous media and to support the production processes of press and marketing material.

Overview of the functionality of new Eyebase Indesign Connectors

"Without Silicon Publishing Inc. as a partner and their in-depth knowledge of Adobe, it would not have been possible to merge Adobe InDesign so closely with eyebase. We wanted more than a plugin where images could be searched for in a database, as it is the case with most DAM-systems," explained Wolfgang Kaufmann, CEO of eyebase.

"The creative work with InDesign has taken on new levels through the direct link to eyebase. It is much easier to conceptualise printed materials. There are no long waiting times when downloading printing data, because we can immediately work with low-res data, which can automatically be replaced in the background.

"As a company with a wide range of products and services in company and association communications, we often work in teams. During layout preparation, we can inform an image editor of our wishes via eyebase. He/She then edits the image and creates the change as a new version via eyebase. The graphic designer instantly receives the information that a new version of the image is available in InDesign and can update its draft with one click," explained Markus Trachsel, head of pre-media services.