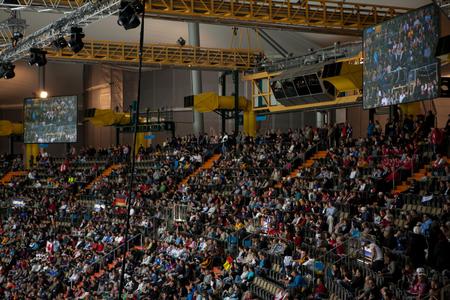 (PresseBox) ( Mönchengladbach, 11-04-01 )
For the people of Munich, their Olympiahalle has been far and away the event location since the Olympic Games in 1972. Whether it's ice hockey, a rock concert, a riding tournament or motocross, Aida or the Dalai Lama: the Olympiahalle is always the perfect venue. It can handle up to 15,500 visitors in a converted space of at least 427,000 cubic metres.

A total of six projection areas were installed around the grandstands, each of which had an image width of seven metres. The decision here was not to go for LED walls, as Bernd Noack from proAV Consulting in Cologne, the building manager for production and the central control room, explains. "On the one hand, the installation of LED walls with their not insubstantial weight above the last spectator row would amount to a considerable static load for the self-supporting concrete construction of the upper levels. Furthermore, the excessive noise from unavoidable ventilators required by LED walls would be an issue. There is also the question of dirt. The LED boards that were installed in the centre of the hall until 2010 had to be cleaned at least once annually, since special events such as motocross or riding generate no insignificant level of pollution. Cleaning six LED walls respectively above the last spectator row would cause a fairly large use of working resources."

The areas are projected onto with six Christie Roadie HD+35K projectors which, according to Noack, were the only device that provided everything that was required for this installation. What was decisive here was the brightness, warping function, contrast, handling, soundproof housing and the size of the devices. All criteria that enabled the Roadie to HD+35K score points, being the brightest HD projector available at the moment with up to 32,500 ANSI-Lumen.

Noack goes on: "The costs, the weight, the noise development, the maintenance possibilities and also a very convincing test projection played a role and finally led to a mutual decision for Christie devices between developer, operator, architect and planner."

The Media Image company from Zorneding was responsible for the installation of the projectors in the Munich Olympiahalle and as their Managing Director Peter Mrakovits adds in connection with the projectors: "The Christie HD+35Ks are simply unique for this application."

Peter Mrakovits explains the peculiarities of the installation in the Munich Olympiahalle: "From a technical point of view, it was partly a great challenge as the projectors are shifted from their axis and the projection angle has to be individually set. For this, we developed a special setting mechanism. The other aspect was that the projectors had to be fitted with aerial soundproofing covers at a height in excess of 20 metres. We discussed the safety arrangements in depth with our engineers and technicians since the projectors were suspended above the audience. It was via our internal development department that custom-made soundproof housings were developed that met these special requirements.

Another consideration was that the operating safety of the projectors had to be maintained by means of two electronically-controlled air lines. Air pollution in the hall is measured and the connection is switched to an alternative air line when a certain value is indicated, while the first air line regenerates and is then fed in again. In addition to this we had to be sure in our interest, as well as in that of the operator, that the projectors were freely accessible for smooth and rapid maintenance. Using special platforms that are freely movable and can be rotated and pivoted through 360 degrees, changing lamps - for example - can be performed swiftly and easily without using an external crane truck, since the soundproofed housing can be individually dismantled. I am particularly proud of the fact that our entire team was able to handover the project punctually and without complaints, despite a very tight window of time."

The steel brackets required were supplied by the AWN company in Nuremberg. AWN was also responsible for the extension of the illumination bridge and the projection areas, together with their mounting.

The projection distances in the Olympiahalle are in the meantime at between ten and twenty metres, the lenses in use are two 1.8-2.4:1, 1x 2.2-3.0:1 and three 3.0-4.3:1.Aluminium plates on steel carriers that hang above the audience serve as the projection area and are coated with a special grey coating of proFLEXX by rs-products in order to provide a very high image contract. Because of their considerable size of 7.70 m x 4.33 m, the projection areas had to be assembled onsite in the hall. They are equipped with special damping materials to counteract high oscillation and are very compactly screwed together and bonded in order to avoid any damage by temperature variation.

The content consists of HD-SDI and HDMI images which is all in full HD at 1080i or 1080p. Images come from a an HD video mixer or the HDMI matrix, as well as live images and digital content (generally advertising) from 3-Media media players. The directing technology and the new glass-fibre infrastructure were installed by the sono Studiotechnik company from Munich.

The Media Image team was on location with between four and eight people for a total of 45 days. Says Bernd Noack: "It was all very tight, but it finally worked out without any problems. Cooperation between a total of seven companies that shared the site when restructuring the Olympiahalle functioned magnificently."

In the meantime, the installation was taken over by Stadtwerke München SWM, where people were equally very positively surprised that - despite complicated technology - simple operation was possible, also thanks to the user-friendly programming by Michael Heidler from Heimedia, Erzhausen.

The first major events slid along very smoothly, figuratively speaking. In the course of ice hockey matches, the audience were able to follow the details of the game without having to turn their heads. Needless to say, this innovation was welcomed by a very keen audience.

Christie Digital Systems Canada Inc. is a global visual technologies company and is a wholly-owned subsidiary of Ushio, Inc., Japan, (JP:6925). Consistently setting the standards by being the first to market some of the world's most advanced projectors and complete system displays, Christie is recognized as one of the most innovative visual technology companies in the world. From retail displays to Hollywood, mission critical command centers to classrooms and training simulators, Christie display solutions and projectors capture the attention of audiences around the world with dynamic and stunning images. Visit www.christiedigital.co.uk.