6th CFK-Valley Stade Convention 2012 has been a great success: More than 420 participants, almost booked out exhibition and first bookings for 2013 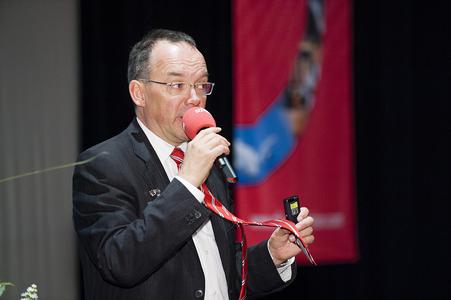 (PresseBox) ( Stade, 12-07-04 )
“Productivity and Economic Efficiency” were the focus of the 6th International CFK-Valley Stade Convention that took place on 12-13 June in Stade and attracted
a lot of interest: over 420 participants, 20% of which were international guests (from the UAE, Japane, USA and all of Europe). A nearly completely booked expert exhibition as well as first binding registrations for the next Convention in 2013 clearly reflected the positive atmosphere of this year’s CFK-Convention.

As an introduction into the 1st Convention-Day, Peter D. Dornier gave a very interesting keynote titled with "The (Textile) Empire strikes back" - From airplane construction in the past to carbon fabrics for composites in the future. Mr Dornier is CEO at Lindauer DORNIER GmbH since 2001 and talked about the first large all-metal aeroplane in 1916
to the first mass-produced jet aircraft with Carbon Fiber components in its primary structure in 1973. Dornier has always been a pioneer in the usage of new materials for lightweight design. It’s unique history encompassing aircraft as well as textile and plastics machinery production enables an inspiring and visionary view into material developments of the last 100 years and beyond.

At the evening event all participants were warmly welcome to the „Gut Deinster Mühle“ in Deinste as a special way of concluding the first day of the Convention. Relax and unwind together with the speakers, exhibitors and participants at this 800-year-old manor and savor the summer atmosphere of a grill buffet with jazz music in the background. Enjoy the fascinating contrast of the traditional and modern world and take advantage
of the opportunity for more in-depth conversations on your first day of the Convention in a relaxed atmosphere such as in the traditional manor stables.

Highlight of the evening was the bestowal of the “Composite Innovations Award” 2012. The award is endowed with a scholarship valued at 18,000 Euro for the
“Verbundwerkstoffe/Composites” course of studies that culminates with a Master of Science at the Private University of Applied Sciences Göttingen. This year’s laureate has been a cooperation between Voith Turbo Scharfenberg, East4D, TU Chemnitz/Institut für Strukturleichtbau (IST) for their project “The First CFRP coupling for rail vehicles".

The report „CFK-Valley Stade Convention 2012“ is for download available:
www.cfk-convention.com
---

It’s an (R)Evolution: International CFRP-experts dis-cussed "Industry 4.0 for Composites" in detail at the CFK-Valley Stade Convention

Recommend 6th CFK-Valley Stade Convention 2012 has been a great success: More than 420 participants, almost booked out exhibition and first bookings for 2013 press release