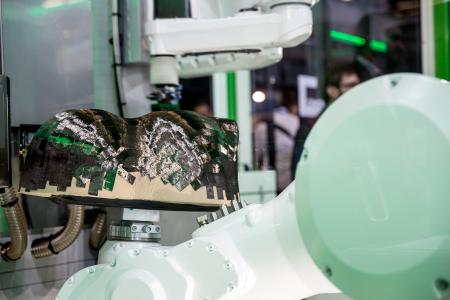 “We are very happy to gain so much attention with the world premiere of our industrial Fiber Patch Placement preforming system and software”, states Thorsten Groene, Managing Director of Munich-based Cevotec. “The three live performances on every day of the fair were very well attended.” Visitors took strong interest in the revolutionary new technology, presented by Groene and his co-founder and CTO Felix Michl. “With patch technology, we implement digital production concepts in the fiber composite industry. This is Composites 4.0.”

“For the first time ever, people could watch how SAMBA creates a preform with a challenging 3D geometry in an additive manufacturing process. “Defined fiber pieces, so called patches, are placed with a rate of one patch per second on a 3D mold. The optimal positioning of the patches significantly improves the mechanical properties of the finished component”, explains Michl. The demonstrator was an aerospace gearbox with concave and convex surfaces, 90 degree angles and small radii. “SAMBA masters this challenge as if it was dancing. The speed and accuracy of the system impressed representatives of industry, science and media alike”, remarks Michl. “Also important for our customers: the system, jointly developed with our partner Baumann Automation, is adaptable to many application scenarios. It works as stand-alone system as well than as part of larger industrial production chains.”

SAMBA’s dance-like robot movements are enabled by Cevotec’s proprietary, easy-to-use CAD-CAM software ARTIST STUDIO. “The software comprises two modules of the virtual process chain”, explains Dr. Neven Majic, Executive VP Software Technology of Cevotec. “PATCH ARTIST generates the digital laminate and MOTION ARTIST uses this laminate for collision-free offline programming of SAMBA’s two interacting robots. Therefore, we also presented the software, and visitors could experience the complete digital and physical process from importing the CAD-file to the production of a complex fiber preform.” The functionality of SAMBA and ARTIST STUDIO is also explained in the following video at http://cevotec.com/en/fpp-technology/.

Currently, the process works with dry fiber tape. The prepreg-version of SAMBA will be released in the course of the year. Also, more modules with FE-based functionality like the new module for load path calculation, will be added to future versions of ARTIST STUDIO.