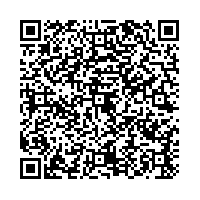 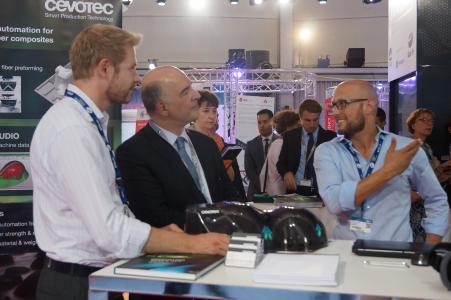 (PresseBox) ( Taufkirchen bei München, 17-06-28 )
The Concorde Hall of Le Bourget regularly becomes "boarding zone" for innovations during the Paris Air Show. This year, the impressive showroom and the exquisite ESA pavilion were the presentation spaces for the world’s first aircraft windows funnel manufactured with Fiber Patch Placement technology. As a partner of the Starburst Accelerator and the ESA Business Incubation Program, the Munich Startup Cevotec was invited to present the extraordinary prototype.

“The direct 3D preforming of this specific geometry is a real challenge to automated production processes," reports Felix Michl, Cevotec's CTO. The biaxially curved and annularly closed funnel preform requires a constant radial and circumferentially oriented fiber architecture. Thus, it is perfect for demonstrating the unique possibilities that Fiber Patch Placement offers for the production of complex 3D preforms. "As of today, there are different ways of producing an aircraft windows funnel", explains Michl. ”For example, you can stitch bindered carbon fiber to produce a flat preform and then fix the material in a thermos-press. After an elaborate removal of the stitching yearn, the L-form is achieved in a forming step. In yet another step, the circumferentially oriented fibers are applied in a filament winding process. The resulting preform, again, is thermally activated and pressed a second time before it is impregnated with epoxy resin. Altogether, the process is very expensive, slow and ineffective.”

Fiber Patch Placement, however, enables manufacturers to produce an aircraft windows funnel preform in a single, automated production process. First, the CAD-CAM software ARTIST STUDIO creates an optimized, digital fiber laminate from a common CAD file. Based on this laminate, the software also performs an offline programming of the placing and handling robots of the SAMBA production system. The production system then additively manufactures the 3D preform with highest precision. With the Cevotec patch technology, several production steps and manual processes are eliminated, while the production cycle time is measurably accelerated and the costs are significantly reduced. "In addition", emphasizes Michl, “a component manufactured in Fiber Patch Placement technology outmatches the strength and load-bearing capacity of metal but weights only a fraction of it. Also, geometries can be formed that are not possible or respectively too labor- and cost-intensive with traditional technologies.” Currently Cevotec processes primarily dry fiber. “But processing of thermoset prepreg will be possible within the next few months”, concludes Michl.

Visitors in Concorde’s hall and ESA pavilion were definitely impressed by Cevotec’s presentation. “Besides the prototypes of the windows funnel and a gearbox, we also demonstrated the SAMBA preforming system in an VR-environment”, reports Thorsten Groene, Managing Director of Cevotec. “EU commissioner for Economic and Financial Affairs, Pierre Moscovici, and European Space Incubators Network Manager, Bruno Naulais, experienced our Industry 4.0 SAMBA system in virtual reality. And it was a pleasure to have French president Emmanuel Macron among the passers-by, as he visited the innovation area on Monday morning.”