CEE Group acquires wind farm with a capacity of 27.6 megawatts in Brandenburg from Green Wind Energy and European Energy A/S 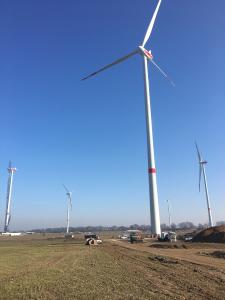 (PresseBox) ( Hamburg/Copenhagen/Berlin, 17-04-25 )
CEE, the Hamburg-based private equity group, continues to expand its wind power portfolio in Germany. It has acquired eight wind turbines in the Vormark wind farm near to the municipality Gross Pankow (Prignitz) in Brandenburg. The seller is a consortium consisting of the Danish company European Energy A/S and the Berlin-based Green Wind Energy GmbH.

The wind farm consists of eight turbines (type Vestas V126, 3.45 MW). The hub height is 137 m, the rotor diameter is 126 m, and the overall capacity of the wind farm amounts to 27.6 megawatts (MW). The turbines, which were commissioned on time in February and March, will supply environmentally friendly power to about 21,000 households a year. CEE Operations, which manages the CEE Group’s power plant portfolio, is responsible for the commercial operations. Green Wind Operations GmbH, a sister company of Green Wind Energy GmbH, will assume responsibility for technical operations.

Detlef Schreiber, the CEE Group’s CEO, says: “We are pleased to have grown further in our core German market by acquiring the Vormark wind farm. After the acquisition of the Gollenberg wind farm a few months ago, this renewed expansion of our overall portfolio underlines the CEE Group’s strong position in a competitive market.” Jens Schnoor, the responsible Investment Director of CEE Management, emphasises: “To acquire a wind project of this size in the current market environment is a very positive start to 2017 for our investors and for us. We hope that this first transaction with European Energy A/S and Green Wind Energy marks the beginning of a longer period of collaboration.”

Martin Kühl, Managing Director of Green Wind Energy GmbH, as the project developer of the wind farm, emphasises: “We are focusing increasingly on the repowering of old turbines and in Gross Pankow we have doubled the MW capacity by deploying new, highly efficient turbines. Green Wind, together with European Energy, has found a strong partner in the CEE Group, which pursues a sustainable energy policy. In our view, repowering will also play a significant role in this connection even after the introduction of the new Renewable Energies Act (EEG).”

Knud Erik Andersen, Managing Director and main shareholder of European Energy A/S stresses: “With the successful implementation of the project in Vormark we were once again able to demonstrate our expertise in the German market as one of our core markets. In addition, the project testifies to our expertise in the field of repowering. We are pleased to collaborate with experienced partners such as the CEE Group and Green Wind Energy and also see new opportunities for cooperation in the future.”

Following the acquisition of the Vormark wind farm, the CEE Group’s renewables portfolio has grown to about 585 MW. In 2017, CEE’s energy parks will probably generate around 920,000 megawatt hours (MWh) of electricity from renewable sources.

European Energy A/S, whose head office is in Copenhagen, Denmark, is a private company in the renewables sector, which develops, finances, constructs and operates solar PV and wind energy projects. Since 2004, it has implemented 65 wind projects and 29 solar projects in six countries. Together, they have an installed total capacity of 802 MW with an investment volume in excess of EUR 1 billion. European Energy A/S currently has nearly 500 MW of capacity in six countries in the realisation stage. www.europeanenergy.dk

The companies in the Berlin-based Green Wind Group are specialised in project development, the commercial and technical operation of wind farms and the management of technical installations to produce energy offshore. Established in 2008, Green Wind, through Green Wind Energy GmbH, Green Wind Operations GmbH and Green Wind Offshore GmbH, currently oversees projects throughout Germany with approximately 1,300 MW of wind capacity, both onshore and offshore. www.greenwindenergy.de

CEE, whose head office is in Hamburg, is a private equity group that specialises in investing in physical assets and manages assets of about EUR 1.3 billion. Equity investments are made in energy production projects primarily in wind and solar PV as well as in related technology firms. It has entered into a strategic alliance with RWE Innogy to cooperate in technology investments in young companies. The CEE Group's shareholders are just a few institutional investors and family offices in Germany with a long-term interest in the market for investments in renewables and physical assets. The CEE Group is managed by Lampe Equity Management GmbH, which is owned by Bankhaus Lampe KG and which has more than ten years of experience in financing real assets. www.cee-group.net