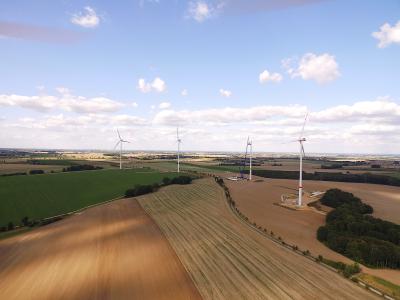 For juwi, the Mohlis wind farm is a milestone project in the more than 20-year history of the company as the first of the four plants is the 1,000th turbine planned and built by juwi. juwi is one of the first German project developers to reach this benchmark. “We are delighted that this special wind farm also has a special operator, with whom we have been working together for many years in a trusting and successful way," comments juwi CEO Michael Class on today's contract signing at the HusumWind fair.

"We are delighted with the acquisition of Mohlis, the juwi anniversary wind farm. This transaction demonstrates the very collaborative and successful partnership between our two companies in both the wind and photovoltaic sectors. Our goal is to continue to work together and to pursue further projects as partners, "said Detlef Schreiber, CEO of CEE Group. Jens Schnoor, Investment Director of CEE adds: "The contract negotiations with our partners at juwi were again goal-oriented and characterized by great mutual trust in the Mohlis project, our seventh joint project."

The purchase price was not disclosed. Debt financing was provided by a longstanding partner of the juwi Group: Berliner Volksbank e.G. with whom CEE has worked with on a number of transactions.

The Mohlis wind farm, located about 20 kilometers northeast of the city of Gera in Thuringia, consists of four Vestas V136 turbines, each with an installed capacity of 3.6MW. The hub height is 149 meters, the rotor diameter 136 meters. Each year, the plants generate together around 50 million kilowatt hours of climate-friendly electricity. This corresponds to the annual consumption of more than 16,000 households. Compared with power generation from fossil fuels, the wind farm saves 37,600 tonnes of CO2. The technical operation of the plants is provided by Juwi Operations & Maintenance GmbH.

The wind farm is not only an anniversary wind park for the Rhineland-Palatinate based project developer, it is also one of the first 2018 projects, which juwi successfully brought through the tender process of the German Federal Net Agency. With 44 wind energy plants and a capacity of approximately 130 megawatts, juwi was one of the most successful participants in the wind and solar energy tenders of the past year. Of the 15 juwi surcharges for wind energy projects, 14 were above the average allowance level.

About the juwi group

The juwi group is one of the world’s leading companies in the field of renewable energy. Company activities are mainly projects with solar and wind as well Operations and Maintenance Services. The juwi group was established in 1996 in Rhineland-Palatinate/Germany. Since the end of 2014, Mannheim based utility MVV Energie AG has been partner and shareholder of the juwi Group. juwi has about 850 employees worldwide, branches on all continents and is actively engaged in various projects all over the globe. Working together with passion to implement renewable energy economically and reliably is what drives us.

So far, juwi has realized more than 1,000 wind turbines with a total capacity of more than 2,300 megawatts at more than 175 sites globally. In the solar segment, more than 1,700 projects with a total capacity of around 2,500 megawatts have been designed and constructed. Combined, these energy systems produce around 8.0 billion kilowatt hours of clean energy per year, equaling the annual demand of more than 2.6 million German households. Within the past 20 years, juwi has initiated an investment volume of around 8.8 billion euros to realize these projects.

CEE Group, which is headquartered in Hamburg, is a private equity group that specializes in investing in physical assets and manages assets of about EUR 1.4 billion. CEE invests in energy generation projects in the wind and solar sectors. CEE Group's investors are institutional investors with a long-term interest in the market for investments in renewable assets. CEE Group was acquired by Brookfield Asset Management in 2017.