Caseking is ready to rock the gamescom 2010 in Cologne! 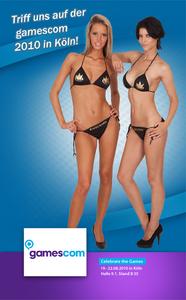 (PresseBox) ( Berlin, 10-08-10 )
The largest gaming expo in Europe - the gamescom in Cologne - will run from 19th until the 22nd of August. A visit of Caseking in hall 9.1, booth B35 certainly pays off as a long list of hardware and gaming brands are showing off exclusive new products and prototypes at the Caseking booth. Visitors can chat up the hardware manufacturers, try out the new products, faceoff against Counterstrike-Legend "SpawN" or win valuable prices during the onstage Shows. Needless to say, the legendary Caseking bikinigirls as well as the team from Hardwareluxx and Technic3D with their overclocking skills will also be on location, to show how to get the most out of hardware without having to pay a penny more.

Gamescom opens its doors on August 19th in Cologne for all gamers and hardware enthusiasts. Over half a million visitors are expected to turn up this year. At the Caseking booth, you will be able to take a close look at all new hardware products. Caseking has partnered up with NZXT, Xigmatek, Prolimatech, Mionix, Lian Li, ZOWIE, Silverstone, OCZ and BIGFOOT Networks. The presented product range includes enclosures, coolers, fans, SSDs, memory, power supplies and as modding accessories as well as gaming equipment in form of mice, keyboards, headsets and mouse pads.

Visitors can try out the latest programing products from ZOWIE and Mionix and play against Counterstrike-Legend Abdisamad "SpawN" Mohamad in War World - Tactical Combat. As he has not yet had the chance to play this title, visitors retain a realistic chance to win against "SpawN" - so start training! Stopping by pays off in any case, as gamers will faceoff using the new progaming mice EC1 from ZOWIE along with a yet unannounced keyboard.

The Survivor and Colossus from newcomer Bitfenix celebrate their Germany debut at the Caseking booth. Also brand new is the gaming tower NZXT Phantom and Phantheon tower from Xigmatek.

Gigantic prototypes as well as CPU coolers and the first cooling fans from Prolimatech are also shown. But Xigmatek is also turning up the heat to keep things cool with the Aegir, Mercury, Sand Blast and Giant Egg coolers, while Mionix is presenting various progaming equipment like the Saiph 5000 mouse at gamescom.

Gaming enclosures from Silverstone, as well as luxurious towers from Lian Li and plenty of hardware accessories are also present on the Caseking booth. OCZ is showing off their newest SSD products, highspeed computer memory and power supplies for gaming systems. Both live gaming station are not only intended to be used in a faceoff against SpawN, but also witness the the Killer 2100 from BIGFOOT Networks in action.

A major aspect of the Caseking presence are the famous giveaway shows from the manufacturers, during which visitors have to overcome various challenges presented by our moderator to win one of the many valuable prices. Hardwareluxx will be present at the booth to present the power of their ultimate dream system, consisting of an EVGA SR-2 with two CPUs, four GeForce GTX 480 graphic cards, fast SSDs in a RAID configuration and complete water cooling, but will also bring along their newest issue of their magazine to the show.

The gorgeous bikinigirls from Caseking turn up the heat, support the contestants and are available to have their picture taken. Those wanting to take a picture with "Germany's Next Top Model" contestant Micaela Schäfer, this is your chance.

For those not able to attend gamescom this year, we will publish a gallery with impressions and action shots of the show, the products and our beautiful bikinigirls on www.caseking.de on a daily basis.

Recommend Caseking is ready to rock the gamescom 2010 in Cologne! press release