Just galactic! 3D CAD spaceship from CADENAS PARTcloud.net on the cover of a science fiction magazine 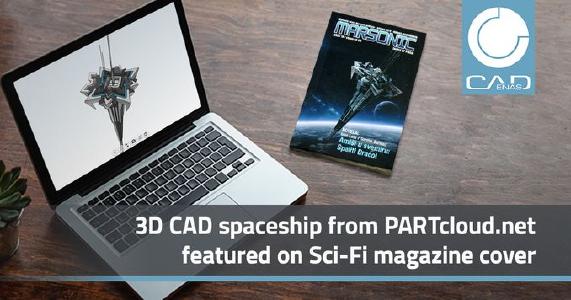 (PresseBox) ( Augsburg, 20-06-10 )
Honourable distinction for the 3D CAD model of a spaceship from the popular PARTcloud.net sharing portal powered by CADENAS: The 3D model named Marsonia was designed by Josip Jakubiv, an expert in 3D modeling and an employee of the Croatian CADENAS branch for 15 years. It has now even made it onto the cover of a Croatian science fiction magazine of the Marsonic series.

Josip Jakubiv based the creation of his extraordinary spaceship on an old fortress in the center of Slavonski Brod, the Croatian CADENAS location. He kept the original star-shaped fortress design and added futuristic elements, such as long antennas on the bottom and top of the fortress. After rendering with Maxwell software, Josip Jakubiv shared his CAD model on the CADENAS exchange platform PARTcloud.net with other 3D modeling experts and the response was overwhelming. This way Marsonia became one of the most popular CAD models on the exchange platform so far.

And that's not all: Science fiction fans outside of PARTcloud.net also became aware of the novel 3D CAD spaceship. The Marsonia model was chosen by the Sci-Fi fan association Marsonikon from Croatia to decorate the cover of one of their Marsonic novels with short stories by various authors. Decisive for this decision was the impressive mixture of history and future as well as the naming, which reminds of the planet Mars. In order to put the 3D CAD model in the best possible light for the forthcoming book printing, CADENAS employee and experienced graphic designer Igor Pavlov gave the spaceship the final touches in selecting the best lighting and background.

In 30 hours to the popular 3D CAD spaceship

Josip Jakubiv spends a lot of his spare time working on his favorite subject, science fiction. For the elaborate and detailed construction of the Marsonia 3D CAD model Josip used the Strategic Parts Management PARTsolutions to find the desired parts from various component manufacturers quickly and easily and to integrate them directly into his design. In total, the expert for 3D modeling needed about 30 hours for the demanding project: "In the past, I have already created a large number of creative models with various mechanical functions, including a T-Rex, a wolf, a worm, a dragon and an ant. But the Marsonia spaceship is something completely new with its reference to the real architecture of the fortress in Slavonski Brod," confirms Josip Jakubiv.

For those interested in history: The star-shaped defensive fortress that served as inspiration for the 3D CAD model Marsonia can be visited in Slavonski Brod. The building dates back to the 18th century and today houses a local museum, an art gallery, a classical sports hall and the town hall of the 53,000-inhabitant town in the east of Croatia.

The popular Marsonia 3D CAD model and other creative models are available at: www.partcloud.net

Brandschutz und Patientenfürsorge bilden den Kern des Geschäftsmodells von Schrack Seconet. Das Unternehmen mit Sitz in Wien entwickelt, installiert und wartet Brandmeldeanlagen und Kommunikationssysteme insbesondere für Krankenhäuser und andere Großprojekte. read more
The publisher indicated in each case is solely responsible for the press releases above, the event or job offer displayed, and the image and sound material used (see company info when clicking on image/message title or company info right column). As a rule, the publisher is also the author of the press releases and the attached image, sound and information material.
The use of information published here for personal information and editorial processing is generally free of charge. Please clarify any copyright issues with the stated publisher before further use. In the event of publication, please send a specimen copy to service@pressebox.de.