In May and June, Slavonski Brod hosted the international competitions for gliders and electric model aircraft 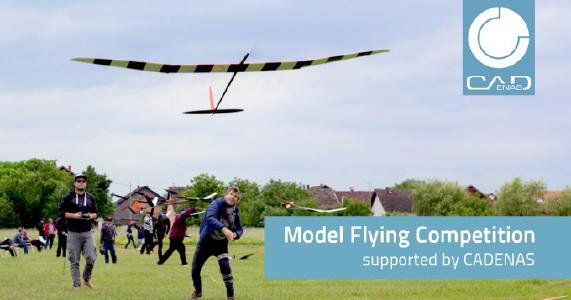 The rules of the competition, which is held by the FAI - the World Air Sports Federation - are clearly defined:

The so-called "FAI F3K", which took place on 25 &26 May, was a multitasking competition in which radio-controlled glider models were started by hand and certain exercises had to be performed. The competition should consist of at least five rounds within a 10 minute time frame. The model airplanes are small and were thrown into the air by hand.

At the "FAI F5J" competition at the beginning of June the rules were stricter because the planes are bigger and have an electric motor. The take-off, flight and landing phases are strictly prescribed and any deviation from these rules will be penalized with a point deduction. But not only the strict rules made this event a tough competition.

The participants had to struggle not only with wind and rain, but also with a fighting stork. But in the end a lucky winner could be chosen, who received a trophy, a CADENAS team shirt and a glider with an electric motor.

The CADENAS team also supported the competition as line judge, points judge, photographer and at the award ceremony.

The video of the "FAI F5J" competition

The next competition, the Croatian national championship for electric motor gliders on 22 & 23 June 2019, is already in the starting blocks and CADENAS will of course be part of it again.

Das Bundesamt für Sicherheit in der Informationstechnik (BSI) hat kürzlich Untersuchungen gegen chinesische Smartphone-Hersteller eingeleitet. Die Behörde reagierte damit auf eine Warnung der litauischen Cyberabwehr, die zuvor auf Sicherheitslücken und Funktionen zur Zensur in aus China stammenden Geräten aufmerksam gemacht hatte. read more
The publisher indicated in each case is solely responsible for the press releases above, the event or job offer displayed, and the image and sound material used (see company info when clicking on image/message title or company info right column). As a rule, the publisher is also the author of the press releases and the attached image, sound and information material.
The use of information published here for personal information and editorial processing is generally free of charge. Please clarify any copyright issues with the stated publisher before further use. In the event of publication, please send a specimen copy to service@pressebox.de.