Technologies for the efficient manufacture of value-added oriented films 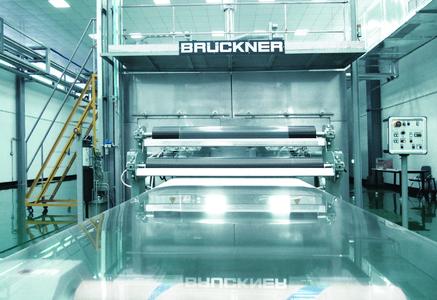 - Line concepts for multilayer film applications with dedicated functional layers for cost-optimized film production as well as sustainable packaging solutions. In its own technology center, Brückner has developed several promising new multi-layer film types and has implemented this expertise in its film stretching line technology, such as for high-barrier BOPP films in 5, 7 or 9 layers.

- To meet the fast-growing demand for a wide variety of thin-gauge BOPET packaging films, Brückner will be presenting its latest technologies which provide film producers with a huge potential.

In all lines, Brückner Maschinenbau continues to optimize the possibilities for energy savings and thus to reduce also CO2 emissions. The measures presented at Feiplastic include low energy twin screw and single screw extrusion systems, a TDO heat recovery system, regenerating energy for line drive systems and an energy monitor for measuring and analysing the energy consumption of the film production process.

Additionally Brückner comes up with more solutions for a sustainable film production, such as complete new lines as well as modifying existing lines for bio-plastics processing, down gauging of films to reduce raw materials used or the development of ultra-high barrier to reduce subsequent process steps.

New developments in the R&D department

Brückner Maschinenbau, the world market leader for film stretching lines, is a member of the Brückner Group, Germany, a worldwide leading supplier of tailor-made engineering solutions and services for the plastics and packaging industry, with 2,000 employees. Other members of the group include Brückner Servtec, offering service and upgrading for existing film stretching lines, Kiefel, specializing in machines for forming and joining plastic materials for a variety of industries, and PackSys Global, one of the world's leading packaging equipment manufacturers.

The German Brückner Group is a worldwide leading supplier of innovative products, tailor-made engineering solutions and services in the field of plastics machinery: film stretching lines, machines for the forming and joining of plastic materials, specialized equipment for the packaging industry service & upgrading products.

Within the Group, Brückner's film stretching technology division has succeeded since 1960 in maintaining its pioneer position, constantly breaking new ground in the field of line equipment. Today, more than half of the accordant investments within the bi-oriented film industry are spent on Brückner equipment. Brückner's lines guarantee efficient, flexible and reliable film production of all types.

Kiefel is specialized in machines for forming and joining of plastic materials for a variety of industries worldwide: automotive industries, medical technology, packaging and refrigerator industries.

PackSys Global (Switzerland) is a global leading manufacturer of specialized equipment for the packaging industry: lines for aluminum, plastic and laminate tubes, metal and plastic closures and monobloc aerosol cans, dry offset printing systems which can be integrated into production lines for tubes, metal caps and cans.