Eight Multi-Purpose-Cranes on their way to the United Kingdom 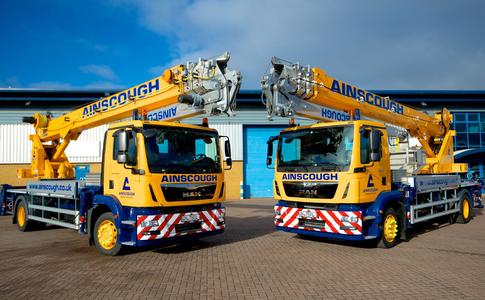 (PresseBox) ( Werne, 15-02-24 )
Aluminium HGV crane technology from Werne, Westphalia, has enjoyed an excellent reputation in other European countries for many years. Recently, the British crane rental company Ainscough ordered a total of eight truck-mounted cranes of type AK 44/4000 from Böcker through their UK dealer Kranlyft. Apart from their maximum extension length of 44 metres, the models score in particular by their compact and lightweight aluminium design. The latter makes the multi-purpose-crane extremely versatile and suitable for use even in very confined spaces.

Since last year, the building industry in the United Kingdom is undergoing a period of distinct growth: Building work in the second quarter of 2014 increased by 4.8 percent compared to the previous year. The gross domestic product of the United Kingdom rose during that same period by 3.2 percent, which is the highest increase since more than six years. The share of the construction industry in this figure amounts to 6.3 percent. The activities of Böcker Maschinenwerke and its sales partner in Great Britain, Kranlyft, also benefit from this upswing.

The largest British crane rental company Ainscough ordered a total of eight of the biggest aluminium truck-mounted cranes of Böcker type AK 44/4000 in September 2014. The British company, with more than 455 mobile cranes for rent in 29 locations and a workforce of over 1,000, is expanding its range of products. It therefore in future offers an interesting alternative in the crane technology sector, which is characterised not only by power but also by compactness and manoeuvrability. Delivery of the first cranes already took place in December last year; the last models will be delivered by the beginning of March 2015.

The Böcker aluminium crane AK 44/4000 convinced the prospective British buyers above all by its particularly good combination of power and efficiency. With a maximum extension length of 44 metres, it outreaches all other Böcker truck-mounted cranes. The range of 35 metres also provides a very large working area and makes the model a real "giant" in its class. Thanks to its PTO auxiliary drive, the mast can extend and retract even at a maximum load capacity of four tons without any problems.

Furthermore, the Böcker aluminium crane AK 44/4000 is further characterised by efficiency and manoeuvrability in harsh every building site conditions. The relatively low body weight enables installation in the current form on an MAN HGV (type TGM 18.250), such that the aluminium crane AK 44/4000 will not only convince in its future applications by its favourable consumption figures but also by the compact design of the vehicle. Apart from excellent driving performance, the latter in particular ensures very precise positioning. The fully variable hydraulic support system enables individual adaptation of each individual support to the space requirements on site. Hence, the modern aluminium crane is even suitable for the most demanding installation situations.