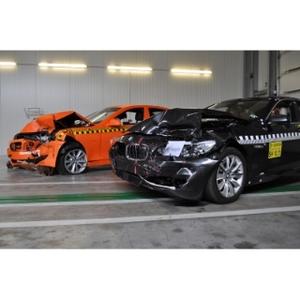 (PresseBox) ( Munich, 10-05-28 )
Up until now, verification of vehicle safety has been obtained by means of crash tests in which structural integrity and restraint systems were tested in a nonbraked situation. However, thanks to modern electronics such as those also featured in the new BMW 5 Series and BMW 7 Series, protective systems that warn the driver in advance of an accident and prepare the driver and the vehicle for impact in the event of an unavoidable collision, are becoming more and more widely accepted.

Future testing procedures will have to make allowances for the effect of preventive protection systems. In a recent world premiere, the BMW 530d successfully passed a crash test involving brake intervention at the facility of the Deutscher Kraftfahrzeug-Überwachungs-Verein (DEKRA) in Neumünster near Hamburg.

Every motorist is familiar with the situation: The end of a tailback suddenly appears behind a motorway bend. If a motorist is inattentive or visibility is impaired, a rearend collision is imminent. after all, this is the cause of around 40 percent of all motorway accidents involving injured persons.

In order to defuse this kind of hazardous situation, some premium segment vehicles such as the BMW 5 Series are already equipped with anticipatory assistance systems that help reduce the risk of such accidents. BMW's successful upper midrange model, which was just recently brought to market, features - combined with Active Cruise Control - an optional rearend collision warning system incorporating a braking function that activates an alarm scenario in two stages.

In the event of a potential collision with the vehicle in front, the driver is first given a preliminary warning by means of an illuminated red vehicle symbol on the instrument panel and on the Headup Display. At the same time, the braking system is prefilled and the minimum triggering level of the hydraulic brake assistant lowered. This ensures that in an emergency brake pressure is built up faster when the driver applies the brakes, therefore significantly reducing the stopping distance.

If the danger of collision is acutely imminent, the second stage of the collision warning commences. In situations demanding particularly rapid intervention by the driver, the system activates an acoustic signal in addition to the visual warning. Should the driver still not react to the request to apply the brakes, a timelimited delay procedure is activated: The car brakes for 1.2 seconds with reduced deceleration, whereby speed is already reduced before the driver can apply the pretensioned brakes.

Based on the information supplied by the radar sensor of the Active Cruise Control system (ACC Stop &Go) featured in the new BMW 5 Series, the system detects when a collision can no longer be avoided by the driver's reaction. In this case, an automatically activated emergency brake application function ensures that collision speed is, nevertheless, significantly reduced.

Based on a conventional EuroNCAP test with the car approaching an offset obstacle at 64 km/h, a socalled offset crash, the vehicle used in the DEKRA test incorporating advanced brake intervention likewise initially accelerated to 64 km/h. However, immediately before impact the BMW 530d braked hard - as stipulated by the system - and collided with the offset block at a reduced speed of just 40 km/h.

Due to full brake application immediately prior to impact and the car's pitching movement resulting from this, the vehicle changes its position, particularly when the front bumper hits the block. The vehicle collides with the obstacle in a slightly "lower" position than in the case of a crash occurring without prior application of the brakes.

Concerning the deceleration, occupants also assume a position further forward. More important, however: In the event of a crash incorporating prior brake application, the severity of impact is reduced considerably, thereby significantly lessening the strain on all occupants.

Previous testing facilities have not permitted verification of the effect of anticipatory occupant protection systems in crash tests. The demonstrative test implemented by BMW in collaboration with DEKRA is the first step in testing future precrash scenarios, as in the years ahead innovations in active safety will be found in an increasing number of vehicles, with BMW playing a leading role.