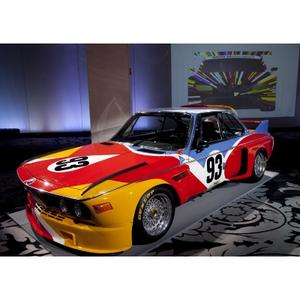 (PresseBox) ( Munich, 11-07-11 )
Just in time to coincide with the 40th anniversary of the BMW Group's international cultural commitment, the legendary BMW Art Car Collection can now be seen for the first time within a virtual video tour on the Internet. For the first time, an extensive virtual overview of the origin, history and development of the collection is available on the Internet. In addition to extensive photographic material, a film has been devoted to every single one of the 17 "works of art on wheels", each of which was designed by an internationally well-known artist. Historic racing footage and artists' statements as well as renowned representatives from art and culture are to be seen. The BMW Art Cars can be viewed at www.bmw-artcartour.com.

"After four decades and a total of 17 BMW Art Cars, they can now all be admired by everyone. The interactive website pays homage to the collection, unique in the history of the automobile and the arts. Whilst the originals are often exhibited individually at the BMW Museum in Munich or at significant cultural institutions throughout the world, people are now able to discover for the BMW Art Cars in their entirety. A comprehensive online tour is now available anywhere and anytime," says Bill McAndrews, head of BMW Group Corporate Strategy and Communications," says Bill McAndrews, Vice President Communications Strategy and Corporate Communications.

Since 1975 renowned artists from all four corners of the world have made their contribution to the series with the creation of contemporary vehicles. In 2010, BMW celebrated the 35th anniversary of the Art Car series. For this occasion, the internationally acclaimed artist Jeff Koons created the 17th vehicle of the collection. All BMW Art Cars will be showcased until 25 September within the first comprehensive overall exhibition at the BMW Museum in Munich to demonstrate a chapter of exciting automobile, design and art history. The works of art are racing and production saloons, coupés and roadsters and are all contemporary witnesses of a mobile lifestyle. The exhibition covers everything from Pop Art of the 70's to the "idea of the continents", right down to new 21st century concepts.

The initial idea of the collection - to have a car designed by an artist - was a product of the imagination of the French auctioneer and passionate racing car driver Hervé Poulain. On his initiative, the American Alexander Calder designed his BMW racing car - the BMW 3.0. CSL - at the beginning of the 1970s. The first vehicle to bring together the worlds of art and motor sport took part in the 24-hour race of Le Mans. The enthusiastic reception of the rolling sculpture was the spark of inspiration that led BMW to create the Art Car Collection.

Hervé Poulain about his vision: "One day, I said to myself, now is the time to do something grandly communicative and heroic and unite my two passions, by having my racing cars painted by the leading artists of the time."

A total of 17 male and female artists from 9 countries and all 5 continents have contributed towards the special diversity and aesthetics of the collection, artists such as Alexander Calder, Frank Stella, Roy Lichtenstein, Andy Warhol, A.R. Penck, David Hockney, Jenny Holzer and Olafur Eliasson. The collection attracts interest all over the world: at the Louvre in Paris, the New York Whitney Museum,

the Palazzo Grassi in Venice, the Powerhouse Museum in Sydney and at the Guggenheim Museums in New York and Bilbao. During the years 2006 to 2010, the BMW Art Car Collection completed a world tour, taking it, inter alia, to museums in Malaysia, Singapore, Korea, Australia, India, Taiwan, China, Russia, Africa, the United States and Mexico. The Arts Cars - symbols of the interconnection between art, design and technology - will also in future continue to be on show at international museums.

Comments by the art car artists

"My design is like a blueprint transferred onto the bodywork." Frank Stella

"I pondered on it for a long time and put as much into it as I possibly could." Roy Lichtenstein

"I love that car. It has turned out better than the artwork." Andy Warhol

"I think mobile museums would be a good idea. This car is the fulfilment of my dream." Robert Rauschenberg

"Ndebele art has, in an entirely natural way, something slightly formal but very majestic about it; through my work I have added the idea of movement." Esther Mahlangu

"The car has wonderful lines which I followed." David Hockney

"By bringing together art, design, social and environmental issues, I hope to contribute to a different way of thinking-feeling-experiencing cars and seeing them in relation to the time and space in which we live." Olafur Eliasson

"These race cars are like life, they are powerful and there is a lot of energy," said Koons. "You can participate with it, add to it and let yourself transcend with its energy. There is a lot of power under that hood and I want to let my ideas transcend with the car - it's really to connect with that power." Jeff Koons

A YouTube video about the BMW Art Car Collection on the Internet can be watched by going to: http://www.youtube.com/...

In 2011 the BMW Group is celebrating 40 years of international cultural commitment. For 40 years now, the BMW Group has initiated and engaged in more than 100 cultural cooperations worldwide. The company places the main focus of its long-term commitment on modern and contemporary art, jazz and classical music as well as architecture and design. The BMW Group has also been ranked industry leader in the Dow Jones Sustainability Indexes for the last six years. In 1972, three large-scale paintings were created by the artist Gerhard Richter specifically for the foyer of the BMW Group's Munich headquarters. Since then, artists such as Andy Warhol, Roy Lichtenstein, Olafur Eliasson, Thomas Demand and Jeff Koons have cooperated with BMW. The company has also commissioned famous architects such as Karl Schwanzer, Zaha Hadid and Coop Himmelb(l)au to design important corporate buildings and plants. The BMW Group guarantees absolute creative freedom in all the cultural activities it is involved in - as this is just as essential for groundbreaking artistic work as it is for major innovations in a successful business.

The BMW Group is one of the most successful manufacturers of automobiles and motorcycles in the world with its BMW, MINI and Rolls-Royce brands. As a global company, the BMW Group operates 25 production and assembly facilities in 14 countries and has a global sales network in more than 140 countries. During the financial year 2010, the BMW Group sold 1.46 million cars and more than 110,000 motorcycles worldwide. The profit before tax for 2010 was euro 4.8 billion on revenues amounting to euro 60.5 billion. At 31 December 2010, the BMW Group had a workforce of approximately 95,500 employees.