Two millionth engine to be built at BMW Hams Hall 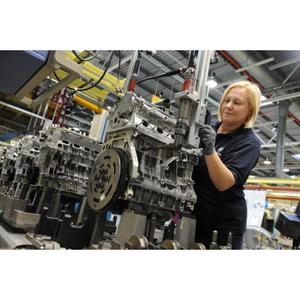 (PresseBox) ( München, 10-02-26 )
Today, a fourcylinder 2.0L petrol engine will be the two millionth power unit to be built since production commenced nine years ago at the BMW engine production plant in Hams Hall, North Warwickshire.

The engine, will be transported to the Regensburg vehicle plant in Germany, built to order and ultimately destined for a British customer purchasing a 318i Saloon - the UK's best selling BMW model.

Coinciding with the celebration of this key milestone is a visit from Harald Krüger, member of the board of management of BMW AG for Human Resources and Industrial Relations, and the former plant director of the Hams Hall production facility.

"To reach two million engines is a fantastic achievement," said Krüger. "The Hams Hall plant is our centre of competence for the production of fourcylinder petrol engines within the BMW Group and is a credit to the skill, flexibility, commitment and motivation of the Hams Hall workforce."

The plant was the result of a £400 million investment and volume production commenced in 2001 with fourcylinder petrol engines for BMW vehicles. Additional investment was made in the facilities to extend production and a second family of engines was launched in 2006 to power the entire range of MINI petrol derivatives.

Last year, in which production at the plant exceeded 360,000 units, further investment was made to enable a revised range of MINI petrol engines to be built, offering the customer even more power and torque while at the same time further reducing both emissions and fuel consumption.

Around 800 associates work at the plant, ensuring the timely despatch of engines to the MINI production plant in Oxford and to BMW vehicle manufacturing plants in Germany, Austria and South Africa, with the latest model to take the highly fuelefficient engines being the recently launched BMW X1.

"There is a strong team culture at the plant and we have a highly skilled and committed workforce with a wealth of experience," said plant director, Mathias Hofmann.

"Our engines are built to the highest standards of quality and delivered to the vehicle production plants in the exact sequence they are required. Everybody at the plant is proud of reaching this major milestone and to be building engines that power both BMW and MINI vehicles sold across the world."