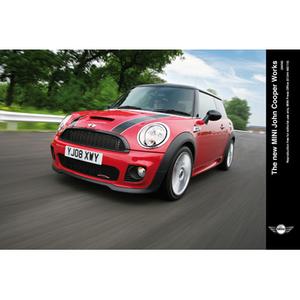 The MINI John Cooper Works will go on sale in the UK from 22 July 2008, priced at £20,995 on the road. First deliveries of the Clubman edition will not take place until early in 2009, when a bespoke aerodynamic kit will have been developed for that model, giving it an even more dynamic presence on UK roads. Pricing for the MINI John Cooper Works Clubman will be confirmed nearer the time.

Both Hatch and Clubman derivatives will be assembled at MINI's Plant Oxford site. The John Cooper Works models will seamlessly integrate into the production schedule alongside other Hatch, Clubman and Convertible MINIs. Sixty per cent of MINI suppliers are UK-based and with body panels from MINI's Plant Swindon and engines from Plant Hams Hall, the MINI Production Triangle is a thriving asset to UK manufacturing.

Fastest ever production MINI* is the torque of the town...and track

A strengthened, larger version of the award-winning twin-scroll turbocharger, partly responsible for the grin on the face of every MINI Cooper S owner, is the heart and lungs of the new MINI John Cooper Works. Developing 211hp and an impressive 260 Nm of torque, turbo boost can be extended even further to 280Nm on deployment of the car's Overboost system. This gives the MINI John Cooper Works the highest peak torque figure ever of any open production MINI. Because full boost is available between 1,850 and 5,600rpm, the car is an outstanding performer on road or track.

A race car for the road...with a conscience

The engine, transmission and braking system of the MINI John Cooper Works Hatch and Clubman models is adapted from the MINI CHALLENGE race car. Little wonder then that a 0-62mph time of 6.5 seconds is the result of extensive performance tuning. All this and a potential 40 miles per gallon. Have your cake and eat it!