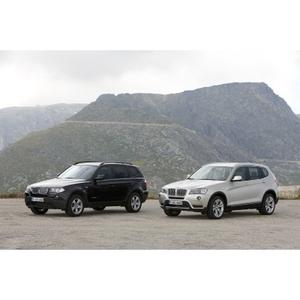 (PresseBox) ( Munich, 10-09-01 )
The BMW Group favoured a smooth transition when carrying out the generation change of the bestseller BMW X3. The end of production of the first generation of the Sports Activity Vehicle (SAV) was celebrated at the plant of the Austrian production partner Magna Steyr in Graz yesterday. Production of the new BMW X3, which will be launched on the German market on 20 November 2010, will begin today at the BMW Spartanburg plant in the US state of South Carolina. The new BMW X3 is a resolute continuation of the formula for success of the first SAV in its class. With further enhanced agility, noticeably optimised driving comfort, more space than any of its competitors and innovative equipment options, it offers the ideal prerequisites to inherit the position of its predecessor as the benchmark in the segment and to strengthen it further.

Within the last 7 years, the firstgeneration BMW X3 has written an extraordinary success story. In Graz alone, 605,498 units of the agile allrounder came off the assembly line during this period. Together with the vehicles produced within the framework of the CKD (Completely Knocked Down) assembly in Russia, Egypt and Thailand, the total figure adds up to 614,824 units. The last vehicle of the first model generation, a Vermilion red metallic BMW X3 xDrive35d, will remain with the Magna Steyr company, where it will be used in future as an executive car. A BMW X3 xDrive20d with full emergency vehicle specifications that had left the assembly line shortly before, will be donated by the BMW Group to a nonprofit making organisation. For many years now, the BMW X3 has proved itself to be an ideal emergency vehicle for police and doctors. At the end of its model life, yet another vehicle will now take on this important task in the service of the general public.

As the first and, for some time, the only premium vehicle of its kind, the BMW X3 launched in 2004 and boasting intelligent fourwheel drive BMW xDrive, outstanding handling characteristics and a variable interior, gave reason for spontaneous enthusiasm and a lasting positive response on the international automotive markets. As a result, the concept of establishing benchmarks in the field of driving dynamics within the competitive environment of allterrain vehicles, which had previously already been successfully pursued in the case of the BMW X5 in a higher segment, was endorsed yet again.

Driving pleasure, premium quality and, in addition, outstanding efficiency helped the BMW X3 become extremely popular and achieve excellent results in independent surveys. Experts have honoured the BMW X3 with several awards for outstanding safety, customer satisfaction, reliability and stable value. These included top rankings in the "Customer Satisfaction Index" (CSI) issued by the J.D. Power market research institute, as well as in the breakdown statistics kept by the Allgemeine Deutsche Automobilclub (ADAC). Twice in succession, the BMW X3 was voted both "Four-Wheel Drive Car of the Year" and "Off Road Vehicle of the Year" respectively by readers of the magazines "Auto Bild Allrad" and "Off Road".

The segment established by the firstgeneration BMW X3 is now also served by other premium vehicle manufacturers. The new BMW X3 faces up to intensified competition with consistently optimised qualities in all relevant disciplines. The engines on offer for this Sports Activity Vehicle boast the best performance and, thanks to BMW EfficientDynamics, the most favourable fuel consumption and emission levels as well. The vehicle's entirely newly developed suspension technology facilitates a clear advantage both in terms of agility and driving comfort. With a loading capacity that can be increased from 550 to 1,600 litres and 40 : 20 : 40 splitfolding rear seat backrests, the new BMW X3 offers the largest amount of space and at the same time the highest level of variability in its segment. Moreover, there is a choice of innovative equipment features, driver assistance systems and mobility services by BMW ConnectedDrive that is unique within the competitive environment. For example, the new BMW X3 is the only model in its class to offer the options of a Head-Up Display and Internet access inside the vehicle.

With the model change, the production of the BMW X3 is being relocated to the BMW Spartanburg plant, a facility that has become the expertise centre for BMW X models. So far, the US American location of the BMW Group's global production network has produced BMW X5 and BMW X6 models. Thanks to substantial extension work and with an investment of around $750 million, the prerequisites for the production of the new BMW X3 and the associated increase in the annual production capacity to around 200,000 vehicles have been created at Spartanburg.

The collaboration between the BMW Group and Magna Steyr also lives on within the framework of the new production structures. In the meantime, production of the MINI Countryman has started in Graz. The fourth model of the brand is not only the first MINI to feature four doors and a large tailgate, but can for the first time also be fitted with fourwheel drive technology. In this way, the Austrian production partner's expertise in the field of allterrain vehicles, which has already been demonstrated in the case of the BMW X3, continues to be comprehensively utilised.

The BMW Group achieved a global sales volume of approximately 1.29 million automobiles and over 87,000 motorcycles for the 2009 financial year. The pretax profit for 2009 was euro 413 million, revenues totalled euro 50.68 billion. At 31 December 2009, the company employed a global workforce of approximately 96,000 associates.