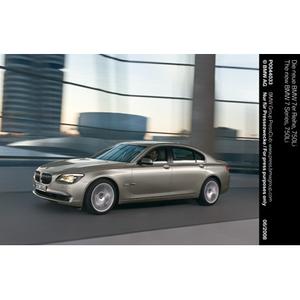 (PresseBox) ( München, 08-07-07 )
The launch of the fifth generation of the BMW 7 Series sets a new benchmark in automotive luxury, technical innovation and class-leading driving dynamics, combined with emissions reducing and fuel saving technology.

The flagship of the BMW model range debuts in November with a host of world firsts and will initially be offered with a choice of three powerplants, one diesel and two petrol engines. The two petrol-powered cars will be offered with a long-wheelbase body too. All three engines produce more power yet use less fuel and produce less emissions than any rival premium product.

The 2,993cc powerplant posts the lowest ever CO2 figure of any BMW 7 Series before it and it is also the most economical 7 Series ever. Its 192g/km emission figure is class-leading for conventionally powered luxury cars, while no other competitor comes close to its 39.2mpg combined consumption figure. It can accelerate from zero to 62mph in 7.2 seconds and has a 152mph top speed.

To put the BMW 730d's competitive advantage in context this luxurious vehicle records near identical fuel consumption and CO2 emissions to the Mercedes C320CDi - a car that is two market segments below the 7 Series and is smaller and lighter than the BMW.

The impressive performance of the 730d is, in part, possible due to third-generation common-rail direct injection incorporating piezo injectors that operates at a peak pressure of 1,800 bar. This system ensures a near perfect combustion process. Weighing 185kgs the new six-cylinder diesel engine is also 5kgs lighter than its predecessor.

The BMW 730d is set to be the biggest seller in the UK, accounting for approximately 85 per cent of sales.

The BMW 750i and 750Li are the range flagships. The new 4,395cc V8 engine from the recently launched X6, featuring twin-turbochargers and high-precision direct injection technology, produces 407hp from 5,500rpm to 6,400rpm. Impressive figures that are backed up by an equally stunning 600Nm of torque from 1,750rpm to 4,500rpm. Such breathtaking performance sees the BMW 750i accelerate from zero to 62mph in 5.2 seconds (5.3 seconds for the 750Li) before going on to an electronically-limited top speed of 155mph. Consumption on the combined cycle is 24.8mpg, while CO2 emissions equate to 266g/km.

The all-aluminium V8 engine powering the 750i and 750Li also features its own world first - twin-turbochargers and catalysts that are placed within the V-space of the engine block. This not only optimises packaging but the reduction in manifold length and larger cross sections mean the engine breathes better for enhanced performance. Double-VANOS variable valve technology and high-precision direct injection technology further aid engine performance to the degree that all the innovations combine to offer a V8 engine that has an equivalent output of a traditional 12-cylinder unit.

Aimed at customers who prefer the characteristics of a petrol-powered BMW six-cylinder engine, the BMW 740i and 740Li are also offered. Using an internationally-acclaimed 2,979cc powerplant, the BMW 740i musters 326hp and 450Nm of torque for rapid yet serene performance. The twin-turbocharged engine features high-precision direct injection and Double-VANOS variable valve technology to achieve optimum performance. The 3.0-litre BMW 740i and 740Li post combined fuel consumption figures of 28.5mpg and 28.3mpg respectively, while returning emissions figures of 232g/km and 235g/km.

All BMW 7 Series models come with a six-speed automatic gearbox as standard.

EfficientDynamics The launch of the new 7 Series completes the line-up of the entire BMW range now being equipped with EfficientDynamics technologies fitted as standard. With its roof, doors, bonnet and side panels all made from aluminium to dovetail with the principle of lightweight engineering, the 7 Series also has other innovative class-leading technology which improves engine performance, while cutting fuel consumption and emissions.

Brake Energy Regeneration uses the engine's power on overrun, such as braking, to charge the battery for the car's electrical circuit. When the driver is accelerating the alternator disengages so all of the engine's power is channelled towards the car's performance. Other ancillaries, such as the air-conditioning compressor, are also able to disengage to improve the all round performance of the car. This intelligent use of drivetrain power is why EfficientDynamics technology has helped the 7 Series become a class-leader in terms of performance, fuel consumption and emissions.

World firsts The BMW 7 Series' drivetrain superiority is reinforced with a plethora of automotive firsts. All 7 Series can now be specified with the world's first Head-up Display incorporating a speed limit warning system. A camera mounted on the back of the rear view mirror scans oncoming road signs to alert the driver of any impending speed restriction. The BMW 7 Series is also the world's first car available with a Side View camera system that operates in conjunction with Park Distance Control. The system provides an overview of traffic conditions on the iDrive display so the driver can negotiate a partially obscured junction, leave a car park or drive through a narrow gate with absolute confidence.

The new BMW 7 Series can be specified with the world's most advanced Night Vision system in a production car. BMW was the first manufacturer to fit a Night Vision system to a premium car and it has now upgraded this package to include an individual person recognition system in another world first. A control unit within the system analyses video data of human behaviour as part of the Night Vision camera's reach and can subsequently alert the driver if it detects a human is moving into the path of the vehicle.

Building on the impressive list of innovations, the 7 Series is the first BMW to feature Lane Change Warning combined with Lane Departure Warning. The latter is a system that first appeared on 5 and 6 Series models and uses a camera to monitor road markings. Should the driver start to stray out of lane, a gentle vibration of the steering wheel would provide an alert. However, courtesy of cameras located in the door mirrors, Lane Change Warning adds another tier of driver safety. The two cameras constantly scan the blind spot either side of the vehicle, up to a distance of 60 metres, and alert the driver to the presence of another vehicle with a triangular symbol in the door mirror.

Completing the host of innovations is speed-related Integral Active Steering. A car specified with this optional equipment allows the rear wheels to turn by up to 3º. At slow speeds it is highly manoeuvrable, while at a faster pace it offers enhanced composure and driving dynamics. BMW's flagship car is also the world's first to come with full-scale Internet connectivity.

Tailormade driving dynamics The latest generation BMW 7 Series is the first to have Dynamic Driving Control featuring Dynamic Damping Control as standard. Dynamic Driving Control is the umbrella function that lets a driver customise the characteristics of his or her car. As part of this Dynamic Damping Control can bet set in comfort, normal or sport modes, but, for the first time, with the added benefit that these settings are infinitely variable depending on driving style and road surface condition. Depending on selected mode the throttle response, gear change speed and steering feel are also altered at the same time.

To aid driving dynamics and comfort the 7 Series is the first BMW Saloon to feature race car-like double-wishbone front suspension. This arrangement allows engineers to fine-tune the suspension for the best kinematic configuration. The rear suspension consists of a five-link arrangement made of aluminium which can be further optimised with the inclusion of Adaptive Air Suspension.

The BMW 7 Series comes as standard with Dynamic Stability Control + featuring additional functions such as Hill-Start Assistant, Brake Drying, Brake Pre-tensioning, Soft-stop and Brake Fade Compensation. Dynamic Traction Control can be activated via a button to enable spirited driving or greater traction of slippery surfaces such as snow and ice.

A new interior The new BMW 7 Series comes with one of the most luxurious interiors of any premium car. In addition to a new iDrive controller and larger 10.2-inch screen, owners will be able to programme frequently selected radio stations or navigation destinations on favourite buttons located on the centre console. For the first time on a BMW the instrument cluster comprises a high-resolution colour display with Black Panel technology. This new style of display makes for greater character clarity and, when not in use, forms a smooth, homogenous black surface that gives the interior an added level of modern elegance.

With its 40Gb hard drive, the BMW 7 Series is the first production car in the world that enables a customer to upload their favourite music to be stored on the vehicle. In excess of 100 albums can be saved in this way for the driver's enjoyment. Four-zone automatic air-conditioning can be specified and, for the first time, the 7 Series can have a rear seat ventilation system combined with massage function. The air-conditioning system feeds cool air to the seat squab and backrest while twelve massage bubbles gently kneed the occupants' upper body.

The BMW 7 Series comes with BMW ConnectedDrive with enhanced BMW Assist and BMW TeleServices as standard. BMW Assist is the reactive safety blanket that automatically dials the emergency services if the driver is involved in an accident. For the 7 Series this life-saving system has been improved so that it can now tell the emergency services the severity of the accident and the likely injuries of those inside. BMW TeleServices sees the 7 Series automatically communicate with a call centre if it the car is due a service or a potential fault is detected. A dealer will then contact the owner to arrange a convenient time to rectify this.

The BMW 7 Series goes on sale in the UK on 15 November, 2008. Prices will be announced in due course.