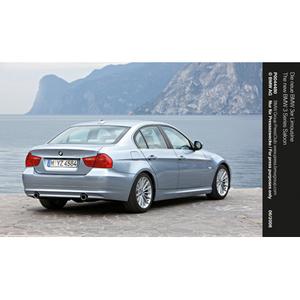 (PresseBox) ( München, 08-07-15 )
Following its March 2005 launch, when it was hailed as offering a new level of achievement for the compact executive segment, BMW's class-leading, and most popular, car has just raised the bar again. The BMW 3 Series has been revised for September and now features a new interior and exterior appearance to combine with its benchmark powertrains and continued unrivalled driving dynamics. The model also comes with all of BMW's EfficientDynamics technologies for best-in-class economy and emissions.

The revised BMW 3 Series is offered with a range of award-winning powerplants, five petrol and five diesel derivatives, from launch. To further underscore its competitive advantage, the BMW 330d engine is a newly developed all-aluminium unit that uses third generation common-rail diesel injection technology with piezo injectors and a single turbo-charger with variable vane geometry. At the other end of the scale, the popular BMW 318d can now be mated to a six-speed automatic transmission for the first time.

The new six-cylinder 2,993cc engine in the 330d produces 245hp at 4,000rpm, 14hp up over its predecessor. Torque has also increased by 20Nm to 520Nm and this peak figure is available from 1,750rpm through to 3,000pm. The impressive statistics mean the performance figures of the new 330d Saloon and Touring have improved compared to the previous model. The 330d Saloon now accelerates from zero to 62mph in 6.1 seconds (Touring 6.2 seconds) before going on to an electronically-limited top speed of 155mph. The economy and emissions of the new 330d have similarly improved from 46.3mpg to 49.6mpg and 160g/km to 152g/km.

The two thirds of new 330d drivers who favour an automatic transmission see an additional benefit as their chosen vehicle will qualify for a lower Vehicle Excise Duty band (D instead of E) with CO2 emissions now 165g/km as opposed to 176g/km.

The performance of the 325d and 335d Saloon and Touring also witness improvements in performance and efficiency. Combined fuel consumption on the 325d Saloon improves from 47.9mpg to 49.6mpg, while CO2 emissions are cut from 155g/km to 153g/km. Customers choosing a 325d Saloon or Touring with an automatic gearbox further benefit as their car now falls into the Band D Vehicle Excise Duty bracket on account of the new 164g/km and 165g/km emissions figures instead of 169g/km and 172g/km respectively.

For the 335d Saloon and Touring models, power and torque output figures are still the same at 286hp and 580Nm, however the Saloon now reaches 62mph from standstill in 6.2 seconds, with the Touring recording a similar jump in performance.

BMW 318d Saloon and Touring are available with a six-speed automatic gearbox for the first time and this offers drivers a more relaxed driving experience for a negligible impact on economy and emissions. A 318d Saloon with automatic gearbox records a combined consumption figure of 52.3mpg and CO2 emissions of 144g/km.

Elsewhere on the 3 Series Saloon and Touring ranges, the powerplants remain unchanged following last year's introduction of widespread engine enhancements. This means the 3 Series model portfolio continues to be powered by the International Engine of the Year for 2007 and 2008 (the petrol-powered 3.0-litre twin-turbocharged unit) and the most fuel efficient and least polluting diesel and petrol engines in their class. All BMW 3 Series powerplants feature direct injection technology and the extensive use of lightweight materials to improve engine efficiency.

The table below underscores the competitive advantage these changes have ensured. Further comparisons of the 3 Series range with competitor products can be gleaned from logging on to www.bmw.co.uk and clicking through the EfficientDynamics link.

*Car with automatic transmission as Audi only offered with this gearbox.

*Car with automatic transmission as Mercedes only offered with this gearbox.

The latest BMW 3 Series builds on its already striking design to keep it as one of the most sporting and luxurious looking cars in its class. Compared to the outgoing ES and SE specification cars, the latest model now features two additional raised precision lines on the bonnet for a more muscular look. The iconic BMW kidney grille has been re-profiled, while the headlights feature twin corona side lights as standard. The front apron has been reshaped too for a more sporting look.

At the side, the valance now features a new crease line for a more sporting look and the wing mirrors have been increased in size for better visibility. The track of the car has been increased by 24mm for enhanced driving dynamics. The rear light cluster has been changed and is now monochrome in colour with LED technology as standard, while the rear valance and boot lid have been re-styled. In addition to these changes seven new styles of alloy wheel designs are offered, including a sports-oriented 17-inch V-spoke alloy wheel as standard on four-cylinder SE specification cars.

Inside, and a revised centre console houses the all-new iDrive system (when specified). For added convenience and improved functionality, iDrive features a new on-screen layout with scroll across display for each chosen function for greater clarity. A 'back' button and shortcut keys mean it is even easier to navigate to a required function. The use of 'favourite buttons' below the iDrive screen add another element of practicality allowing you to call upon favourite destinations, music sources or phone book entries. Other interior changes for the 3 Series include improved ergonomics, such as the positioning of switchgear, and more luxurious materials.

The new operating system is only possible courtesy of the hard disc drive used for of the vehicle's electronic data storage. 8Gb of this space is specifically set aside for the uploading of favourite music tracks. The car is capable of storing in excess of 100 albums. Elsewhere inside the car new trims are available.

All 3 Series Saloon and Touring models come as standard with six airbags, front and rear ISOFIX child seat mounts (including front airbag deactivation) and one of the most advanced stability control systems in the world to guard against accidents. For the first time on a 3 Series the model now comes as standard with active head restraints. In the event of a rear-end collision the front section of the head restraint moves forward by 60mm and up by 40mm to reduce the distance between head rest and the occupants' heads thus reducing the risk of spinal injury.

The current generation of 3 Series was first seen in 2005 and since then an average of 28,000 Saloons and 9,000 Touring models are sold every year. The most popular engine variant is the 320d which accounts for 43 per cent of Saloon sales and 46 per cent of Touring sales. A third of all 3 Series sales in UK are M Sport, but this increases to nearly 70 per cent when taking only six-cylinder cars into consideration.

The new BMW 3 Series Saloon and Touring go on sale on 20 September, 2008, with pricing announced at a later date.