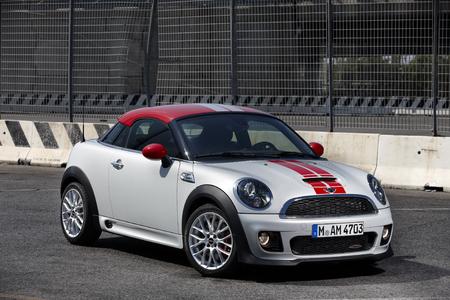 And then there were five. The next exciting chapter in the continuing MINI success story has begun with the launch of the all-new MINI Coupé, the fifth unique model in the family.

Selling alongside the MINI Hatch, Convertible, Clubman and Countryman, the Britishbuilt MINI Coupé is the first two-seater sports car in the UK brand's long and proud history. It's a contemporary and authentic reworking of the classic performance car concept, bringing MINI's intoxicating blend of go-anywhere attitude and practicality to a new type of customer.

The MINI Coupé's mission is a simple one; to maximise the thrill of being behind the wheel. Keen drivers will be rewarded with a level of handling agility unmatched in the small car segment. Every aspect of the MINI Coupé - from the choice of engines and chassis set-up to weight distribution and aerodynamics - is focused on delivering the optimum dynamic performance. To prove the point, the MINI John Cooper Works Coupé has the fastest acceleration and top speed of any volume-produced MINI to date.

The four-strong MINI range will go on sale through MINI dealers from 1st October 2011 and MINI Coupé customers can expect an exceptionally high standard of equipment including; DAB digital radio, air conditioning, park distance control, alloy wheels, 3-spoke sport leather steering wheel and sport stripes on the body work. A wide range of accessories and personalisation choices will be available.

Key to the MINI Coupé's appeal is its stunning exterior design, unlike anything else in the compact sports car segment. Immediately identifiable as part of the MINI family, it's a genuine and appealing re-interpretation of the classic MINI design cues which have become so familiar on UK roads in the last decade. The car's design language - the clever combination of athletically sculpted surfaces, harmonious curves and parallel lines - takes the brand's styling in an exciting new direction, with a fresh and clear emphasis on the marque's sporting DNA.

The MINI Coupé is also an innovative new vehicle. It's the first modern MINI to adopt the traditional 'three-box' body structure, splitting the car into distinct segments - the engine compartment, cabin and boot. While the overall length and width are almost identical to the dimensions of the MINI Hatch, the Coupé's overall height is 29 millimetres lower. Visually, this and the stepped rear end give the car a more aggressive, forward-thrusting profile. The lower roofline doesn't come at the expense of driver and passenger comfort, though. Oval recesses in the headlining provide extra headroom, perfectly illustrating MINI's 'no compromise' ethos.

The styling team led by Head of Design Anders Warming has given the MINI Coupé a distinctive appearance from every angle. The most striking view is undoubtedly the profile, with horizontal layering of the car into three separate tiers - the body, the wrap-around glass and the eye-catching 'helmet design' roof. The A-pillars and windscreen are sharply raked by 13° compared to the MINI Hatch, resulting in a smaller frontal area that gives the MINI Coupé excellent aerodynamic properties.

Air flow is also optimised by the integrated spoiler at the rear of the roof, and via a unique active rear spoiler housed in the bootlid. It deploys automatically when the car reaches 50mph - and drops down again at 37mph - but can be operated manually via a button in the overhead control panel. The Coupé is the first MINI in history to feature an active rear spoiler, which reduces lift at the rear axle to improve aerodynamic balance and road grip.

MINI enthusiasts will immediately recognise the interior of the Coupé. The muchloved large central circular speedo, chrome toggle switches and numerous other MINI trademark features are all present in the two-seater cabin.

Behind is a spacious 280-litre luggage area - 20 litres larger than the MINI Clubman - easily accessible by the driver or passenger from inside the cabin as well as externally via the boot. The large, high-opening tailgate makes for simple loading and the car offers excellent cargo-carrying possibilities that will suit a wide range of needs. Whether it's for daily routine, fun weekend leisure trips or more adventurous touring for two, the MINI Coupé is ideal transport.

Power for the MINI Coupé comes from the latest generation of BMW Group fourcylinder petrol and diesel engines. Outputs range from 122 hp/90 kW in the MINI Cooper Coupé to 211 hp /155 kW in the highly desirable flagship MINI John Cooper Works Coupé. The recently launched performance diesel engine, the 143 hp/105 kW Cooper SD, is also available and the line-up is completed with the Cooper S which offers 184 hp /135kW.

Likely to prove popular with many potential MINI Coupé customers is the Cooper SD variant, which offers the best fuel economy, lowest emissions highest torque output of any MINI. What's more, it will still sprint to 62mph in under eight seconds and carry on to a top speed of 134mph. With a BIK value of just 13%, and zero first year road tax, user chooser company car drivers and fleet managers will also see its obvious appeal. No official figures are available yet, but the MINI Coupé is expected to have class-leading residual values.

In the MINI Coupé, engine power is converted into pure driving fun more directly and comprehensively than ever before. This car is the clearest illustration yet of MINI's legendary sporting DNA being transposed into a cutting-edge new vehicle. The MINI Coupé provides a complete re-interpretation of what a contender in the compact sports car class should offer the driver.

The MINI Coupé takes the legendary go-kart handling of every new MINI to a new high. That each of the four model variants carries the Cooper name in its designation is indicative of MINI's faith in the performance credentials of its newest car. Traditionally, this badge has been a sign of outstanding sporting ability and a nod to the brand's long-time association with legendary Formula One designer John Cooper.

A level of chassis quality unmatched in the small car segment gives the new MINI model the handling flair you would expect from the brand. Designed to be the ultimate expression of go-kart handling, the car's suspension system provides a funfilled, sharp and agile driving experience.

With a multi-link axle at the rear and MacPherson strut suspension up front, the outstanding quality of the chassis engineering, steering and brake system ensures confident control of the vehicle at all times, even when pushed hard in dynamic situations. Compared to the MINI Hatch the Coupé is also equipped with optimised springs and dampers and an uprated rear anti-roll bar to further enhance its sporting credentials.

Work to enhance overall body rigidity has seen a slight forward shift in the MINI Coupé's weight distribution compared with the MINI Hatch. This has major benefits for vehicle dynamics because the slight increase in front axle load increases traction, helping to ensure engine power is effortlessly translated into sporty acceleration.

One of the main attractions of owning a new MINI Coupé will be its straight-line speed. In the case of the MINI John Cooper Works Coupé, it's a MINI record-breaking performance. With a 0-62mph sprint time of 6.4 seconds and a top speed of 149mph, it's the fastest volume-produced MINI to date on both counts.

All versions of the MINI Coupé come with the brand's critically acclaimed MINIMALISM environmental technology as standard, providing exceptional powertrain efficiency. Features such as Brake Energy Regeneration, Auto Start/Stop+, Shift Point Display+, Electric Power Steering and the need-based operation of ancillary components help to make efficient use of fuel with low emissions. Additional features include innovative thermal encapsulation of the drivetrain, which shortens the fuel-sapping warm-up period after a cold start. All of these result in the MINI being the cleanest Coupé in the market place today.

The standard six-speed manual gearbox sets a new benchmark in the segment with its short-shift travel and precise action. A ready-to-drive weight of 44.8 kilograms makes this the lightest gearbox of its kind. The carefully considered ratios guarantee unbeatable agility in mid-range acceleration. In addition, the MINI Cooper S, John Cooper Works and Cooper SD Coupé models all come with an innovative selfadjusting clutch. Automatic readjustment ensures that the pedal feel you expect from a MINI is there to be enjoyed over the car's entire life.

For drivers who prefer the simplicity offered by an automatic transmission, a sixspeed gearbox with Steptronic function, available with shift paddles, can be ordered as an option for the MINI Cooper Coupé, MINI Cooper S Coupé and MINI Cooper SD Coupé.

The MINI Coupé's compelling driving experience is helped by the car's Electric Power Steering (EPS). This electro-mechanical system is particularly effective at soaking up steering shocks and other vibrations.

It features speed-dependent power assist, reducing the effort required from the driver during parking and other manoeuvres. It cuts the amount of assist at higher speeds to improve road feel and directional stability.

With its three brands - BMW, MINI and Rolls-Royce - the BMW Group is one of the world's most successful premium manufacturers of cars and motorcycles. It operates internationally with 24 production sites in 13 countries and a global sales network with representation in more than 140 countries.