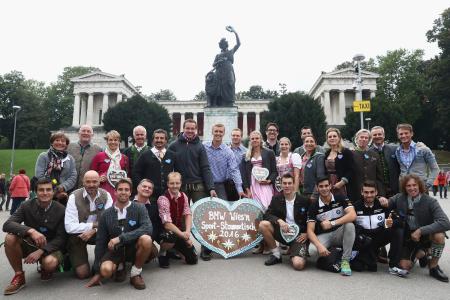 (PresseBox) ( München, 16-09-20 )
The tradition continues: At the 183rd staging of Munich's Oktoberfest, BMW once again invited its sports ambassadors and many prominent athletes from various disciplines to the traditional “BMW Wiesn Sport-Stammtisch” (BMW Wiesn Sport regulars table) at the largest and most famous fair in the world.

The tradition continues: At the 183rd staging of Munich's Oktoberfest, BMW once again invited its sports ambassadors and many prominent athletes from various disciplines to the traditional “BMW Wiesn Sport-Stammtisch” (BMW Wiesn Sport regulars table) at the largest and most famous fair in the world.

For the seventh time, the winter sports, outdoor sports and motorsport stars met in the cosy atmosphere of the “Käfer Wiesn tavern” to discuss the sporting events of 2016 and the upcoming winter sports season. Before that, the sports personalities took an entertaining tour of the fairground – stopping off at the traditional “Münchner Rutschn” (the Munich slide), the bumper cars and the test-your-strength machine.

The guests included former world class biathlete Magdalena Neuner (DE), who was revealed as the BMW Brand Ambassador last week. In addition to Magdalena Neuner, many other highly decorated sports personalities didn't want to miss out on a trip to the Oktoberfest.

“As I have not been a BMW Brand Ambassador for long, this is the perfect opportunity for me to get to know the other members of the BMW family. They are all seasoned sportsmen and women, and I am proud to be a part of this group. Up to now, all the events I have attended with BMW have been very relaxed and great fun. That goes for today at the Oktoberfest too. I am particularly pleased about today, as it will probably be my only chance this year to go to the Oktoberfest.”

“One thing that many people may not know is that there is only an Oktoberfest because my great, great, great grandfather, King Ludwig I, married Princess Therese von Sachsen-Hildburghausen 183 years ago. Back then, he invited pretty much all of Munich to a big party. That was the origin of the Oktoberfest. Obviously the Oktoberfest we know and love now has nothing to do with that anymore. Everything is much bigger and more spectacular. Every year, I look forward to meeting up with my fellow sportsmen and women at Theresienwiese, and to having a chat with them. We are all one big family at BMW, and you really get a sense for that here.”

“This is a great week: yesterday I returned from holiday, today I am at the BMW Wiesn Sport-Stammtisch, and on Thursday I head off to Budapest. The regulars table is a tradition. It is a particularly nice opportunity before a race weekend to switch off a bit, and recharge your batteries.”

“The Oktoberfest is a tradition. However, the BMW Wiesn Sport-Stammtisch has also established itself in recent years, and it is great fun to meet up with the sportsmen and women, and to chat and celebrate together. It is also particularly nice to see new faces here. This year, for example, Magdalena Neuner is the new BMW Brand Ambassador. It is really fascinating to chat to such an exceptional athlete, whether about sport or family. That is what makes this event so attractive.“

“It’s my first time at the Oktoberfest. I am really amazed how big this thing is. It’s not like a festival, it’s like a big theme park, where people come to party. The BMW family has a lot of highly professional athletes, and I have massive respect for each of them. It is very nice to meet them today, and it is going to be a fun day.”

“Even after so many years, I still really enjoy attending the BMW Wiesn Sport-Stammtisch. As a child, I used to come here every year with my sister and grandparents. Things have changed a bit since then, but the heart of the Oktoberfest is the same. The nice thing about this get-together, is that you get the opportunity to meet up again, to chat in peace, and to stroll around the Oktoberfest site.”

“For me, the BMW trip to the Oktoberfest is like an early birthday celebration, as I will be 60 years old in two days. This is the first time that I have been to the BMW Wiesn Sport-Stammtisch, and I am honoured to have been invited. We have the best of the best in its sports here. You can feel the close bond between everyone. It is great to be part of the BMW family.”

“I always like going to the BMW Wiesn Sport-Stammtisch. It is a unique opportunity to meet fellow sportsmen and women from other sports, whose paths would not usually cross. It is really enjoyable chatting to these athletes. I am really interested in how they train, and enjoy taking inspiration from them. I find it very important to take a broader view, and this helps me to manage my own training regimes. To be honest, I am not someone who would normally go to the Oktoberfest, but to do so with BMW is a welcome distraction. This way, the Oktoberfest is great fun.”

“Today is my first time at the Oktoberfest. I did not overestimate the size of it. I am looking forward to spending the day with BMW. It is sure to be a great event. It is nice to be able to wear my traditional Bavarian costume, which we received at the final of the world cup – I wouldn’t have had one otherwise. After a hard summer with some intense training, I am very happy that the season is about to get started again. That is what you wait for as an athlete.”

“A Saxon in Bavaria – a good match. My training in the military meant I was often near the Chiemsee lake in Bad Endorf. Bavaria is a very nice corner of the world. Therefore, I always really enjoy returning. We sportsmen are usually always in competitive mode. It is simply in our nature to always want to prove ourselves. However, even though we might really go for it on the Münchner Rutschen slide, the BMW Wiesn Sport-Stammtisch is primarily about having fun. I always look forward to visiting the Oktoberfest, as it is rather special to be able to meet and chat with athletes from such a wide range of sports.”

“This is my first visit to the Oktoberfest, and I first need to get to know the Bavarian customs. That is why I have turned up without the traditional Bavarian costume this year. However, that will be a different story in 2017. The BMW Wiesn Sport-Stammtisch is aa nice change for us, as we are in the middle of our pre-season preparations. The season kicks off in four weeks, so it is obviously nice to have the odd day off and recharge your batteries. We are certainly going into the new season with a good feeling.”

“The BMW Wiesn Sport-Stammtisch is a nice event every year. We sportsmen and women know each other now, and always look forward to meeting up again in such a nice atmosphere. It is always rather special to receive an invitation from our technology partner BMW, that supports us in many areas of our sport – this year it is like a belated 50th birthday present.”

“The visit to Oktoberfest with BMW is a nice tradition, and a permanent fixture on my calendar. I always enjoy coming back. I had two or three weeks’ holiday in the summer, and am now itching to finally get back on the ice. Preparations have run smoothly so far. The world championships are just around the corner, and the first real test is not far away, in the form of the opening round of the world cup. Let’s see how we get on. But today is all about switching off and enjoying the Oktoberfest atmosphere.”

“As a skeleton athlete, you have to enjoy speed. You cannot afford to be afraid of this speed, otherwise you may as well give up immediately. Therefore, it is the fast funfair rides that I really enjoy at the Oktoberfest. Last week, I was a BMW guest at the DTM, and was able to take a ride out on the track. That was fantastic and a great experience for me. I would like to thank BMW again for that opportunity. It is fascinating to meet the drivers and other sportsmen and women away from their usual workplace, and to find out what they get up to every day. It is often not obvious how much work goes into every sport. You definitely get a lot of respect for every single sport.”

“The Oktoberfest is one of the highlights of the year for us Bavarians, and we have to visit it at least once. It is also always great to meet BMW colleagues from a wide range of different sports. In motorcycle racing, you mostly find yourself socialising with other motorcycle people. Therefore, an event like this offers the opportunity to look beyond biking and chat to other sportsmen and women who are supported by BMW. It is a bit like a day’s holiday: you meet nice people, go on a ride or two, and maybe drink the odd beer. A really successful event and a nice diversion from the everyday routine of a racer.”

“I can’t quite decide what I like most: the sand dunes on the Dakar Rally or the Oktoberfest. They both have their own particular appeal. Events like this BMW Wiesn Sport-Stammtisch are important, because you have to be able to switch off and relax sometimes. Having fun is also part of a successful preparation. The 2017 Dakar is not yet imminent, but it is getting ever closer. So far, everything is going to plan.”