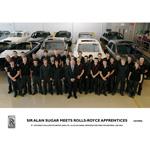 (PresseBox) ( München, 08-02-18 )
Sir Alan Sugar has met the future workforce of Rolls-Royce Motor Cars during a visit to the super luxury car manufacturer’s production facility at Goodwood, England. Sir Alan chatted with apprentices from the wood, leather, assembly and paint departments and saw their work at first hand during a tour of the plant.

Sir Alan is endorsing Gordon Brown’s new policy to boost the skills of the nation, with a goal of one in five young people gaining an apprenticeship within the next ten years. He is also a member of the Prime Minister’s Business Council, created in 2007 to advise on broad issues that affect enterprise, business and the long term productivity and competitiveness of the economy.

The Rolls-Royce Motor Cars apprenticeship programme was successfully launched in 2006 and has received applications from around the world. The programme provides people aged 16-24 with the opportunity to train with the Goodwood-based manufacturer of the world’s best selling super-luxury cars. The apprenticeships last for up to four years and combine on-the-job training with studying for nationally recognised qualifications. The programme has been designed in conjunction with the Learning Skills Council (LSC), South East Economic Development Agency (SEEDA) and Chichester College.

Rolls-Royce currently has 30 apprentices at Goodwood and is now recruiting for the 2008 intake in September.

The apprenticeship programme was joined by a new graduate recruitment scheme in 2007 and, in addition, the company employs around 40 university students each year on industrial placements ranging in duration from six to twelve months. It was recently announced that several hundred new jobs will be created with the launch of a new model series, codenamed RR4, in 2010. Current staff numbers stand at around 700, having increased by around 100 with the launch of the Phantom Drophead Coupé in 2007.

Ian Robertson, Chairman and Chief Executive, said "We were delighted to welcome Sir Alan to Goodwood and for our apprentices to have the opportunity to meet a great advocate of developing skills in the workplace. Our apprenticeship programme, now entering its third year, has been a great success and demonstrates our investment in the next generation of skilled craftsmen and women at Rolls-Royce".

Sir Alan said "I was blown away with the investment Rolls-Royce has made in the apprentice scheme at this leading-edge factory. The level of craftsmanship needed to produce one of their high quality cars is incredible. The apprentices are being taught skills that I thought were a thing of the past, it is very encouraging and impressive to see it in action. There’s a real sense that a future British workforce is being trained in an excellent way".