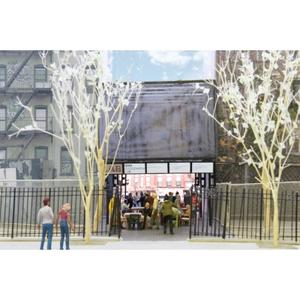 (PresseBox) ( München, 11-06-30 )
The BMW Guggenheim Lab will be a public place for sharing ideas and practical solutions to major issues affecting urban life. Conceived as an urban think tank and mobile laboratory, the BMW Guggenheim Lab will explore issues confronting contemporary cities and provide a public place and online forum for sharing ideas and practical solutions. The BMW Guggenheim Lab and all of its programming will be free to the public. The website (bmwguggenheimlab.org), launching in early July , and online communities will create and extend the opportunity to participate in this multidisciplinary urban experiment worldwide.

In Berlin, the second stop of the global initiative, the Guggenheim and BMW will collaborate with ANCB Metropolitan Laboratory, an architecture exhibition- and research-space in the Pfefferberg complex. Originally built as a brewery in the mid-19th century, today the former industrial complex houses artist studios, galleries, restaurants, and other creative enterprises.

The programming presented at the BMW Guggenheim Lab in the Pfefferberg complex will be created by a specially appointed Berlin BMW Guggenheim Lab Team, an innovative group of emerging talents in their respective fields who, together with Guggenheim curators, will explore urban living issues and strategies that are relevant to the city. The Berlin Lab Team will be announced at a later date.

"We look forward to welcoming the BMW Guggenheim Lab to Berlin next year," stated Berlin Mayor Klaus Wowereit . "In 2012 the BMW Guggenheim Lab will engage our community in a crucial dialogue about urban responsibilities and strategies for the future. With its provocative theme of Confronting Comfort, the BMW Guggenheim Lab will explore the conditions and potentials of our city and of the urban environment worldwide. As a vibrant and progressive center of art and design innovation, and a laboratory in its own right, Berlin will be an ideal site and an important contributor to this exciting initiative."

"I am interested in the exchanges between the urban fabric, the interaction of its users and the wider context, and the constant reformulation of this relation of exchange," said Rirkrit Tiravanija, member of the Advisory Committee of the BMW Guggenheim Lab. "Berlin is an excellent choice for the second city of the BMW Guggenheim Lab. As an urban laboratory, its goals of public exchange and interaction are very well suited to the energy, dynamism, and people of the city."

"The Pfefferberg site in Berlin is an excellent location for the BMW Guggenheim Lab," stated Richard Armstrong. "What better place to explore major issues affecting urban life than in this rehabilitated industrial complex in the heart of one of the world's most progressive centers of culture and creativity- a city that is also home to our own Deutsche Guggenheim? It is a pleasure to be collaborating with the city of Berlin and with BMW, and we look forward to continuing to work together as this exciting initiative continues to evolve and unfold."

"The BMW Guggenheim Lab is coming to Berlin. Following its launch in New York and before it heads for Asia, Germany's pulsating capital offers a creative and fertile environment for this fascinating international project," stated Frank-Peter Arndt . "For 40 years now, the BMW Group has been involved in more than a hundred cultural projects around the world. Together with strong partners in Berlin such as the State Opera, the National Gallery, the Berlinale, the Berlin Biennale and the Gallery Weekend, we warmly welcome the BMW Guggenheim Lab at its only stay in Germany."

''Being intensively and continuously engaged in the communication of architecture and urban design and its ethical, cultural and social dimensions, the collaboration with the BMW Guggenheim Lab is an exciting and inspiring initiative underpinned by common ideas and targets,'' said Hans-Jürgen Commerelland Kristin Feireiss, Directors of the Aedes Network Campus Berlin. "We look forward to this cultural research project with our new neighbor, the BMW Guggenheim Lab, during its stay in Berlin at Pfefferberg."

Over the six-year migration of the BMW Guggenheim Lab, there will be three different themes and three distinct mobile structures, each designed by a different architect and each traveling to three cities around the world.

The theme of the first three-city cycle is Confronting Comfort, an exploration of how to make urban environments more responsive to people's needs, find balance between modern notions of individual and collective comfort, and promote environmental and social responsibility.

About the Solomon R. Guggenheim Foundation

In 2011, the BMW Group is celebrating 40 years of international cultural commitment. During this time the BMW Group has initiated and engaged in more than 100 cultural cooperations worldwide. The company places the main focus of its long-term commitment on modern and contemporary art, jazz and classical music, as well as architecture and design. The BMW Group has also been ranked industry leader in the Dow Jones Sustainability Indexes for the last six years. In 1972, the artist Gerhard Richter created three large-scale paintings specifically for the foyer of the BMW Group's Munich headquarters. Since then, artists such as Andy Warhol, Roy Lichtenstein, Olafur Eliasson, Thomas Demand, and Jeff Koons have cooperated with BMW. The company has also commissioned famous architects and firms such as Karl Schwanzer, Zaha Hadid, and COOP HIMMELB(L)AU to design important corporate buildings and plants. The BMW Group guarantees absolute creative freedom in all the cultural activities it is involved in, as trust is just as essential for groundbreaking artistic work as it is for major innovations in a successful business. More information about BMW's cultural commitment can be found at bmwgroup.com/culture and bmw.com/bmwguggenheimlab.

ANCB is a unique "Metropolitan Laboratory" focusing on the future of our cities. After three decades of exhibiting, publishing, and convening some of the world's most internationally acclaimed and pioneering architects, ANCB has opened its doors to researchers and students from around the world. Since its inception, ANCB has attracted regular contribution from international practices and universities, building a strong and ever-growing global network. From these foundations, ANCB has positioned itself as the hub of an extensive international research network, based on a structure of cultural exchange and knowledge transfer. Partnering with some of the most highly regarded institutions and universities worldwide, ANCB provides a transdisciplinary laboratory environment in which the likes of architects, planners, economists, philosophers, scientists, artists, engineers, and ecologists come together to tackle the key issues facing our globalized urban environments.