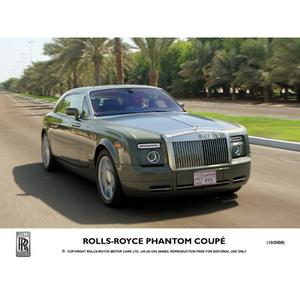 (PresseBox) ( München, 08-10-17 )
Rolls-Royce Motor Cars has unveiled the latest addition to the Phantom family, the Phantom Coupé, for the first time in the Middle East. Stylish and agile, the Coupé is the most driver-orientated car in the current range.

Materials used in the Phantom Coupé have been carefully selected to fuse form with function. The design and engineering team married cutting-edge technology with a stylish, muscular body, to form a car which is noticeably more dynamic, whilst still offering incredible comfort.

"Outstanding engineering, drivability and exclusivity are fundamentals to every Rolls-Royce car", said Peter Schoppmann, Regional Director for the Middle East, at the official Middle East premiere in Abu Dhabi and continued "The Coupé has been designed and engineered to be the most dynamic interpretation of our values."

At the core of the Phantom Coupé is an advanced aluminium chassis. Lightweight and exceptionally strong, it impacts positively on ride comfort, handling and safety. Designed to cover great distances effortlessly, the Coupé's power is provided by the 6.75-litre V12 that produces 453 bhp, 720 Nm of torque and has segment-leading fuel economy.

The interior can be illuminated by an optional starlight headliner, more than 1,600 fibre-optics give the impression of a star-filled night sky.

The Phantom Coupe is a Rolls-Royce for a true driving enthusiast and a sublime choice for a transcontinental trip. The Coupé's pace, performance and style guarantees both passenger and driver will emerge fresh and at ease - even after a full day of driving.

With the four-door Phantom, the Extended Wheelbase model, the convertible Phantom Drophead Coupé and the new Phantom Coupé the model line-up of Rolls-Royce consists of four models. Rolls-Royce has shown impressive growth in 2008, with strong demand for Phantom four-door coupled with significant interest in the Phantom Drophead Coupé following its Middle East launch in September 2007.
The first Coupés are being handed over these days to customers throughout the region.