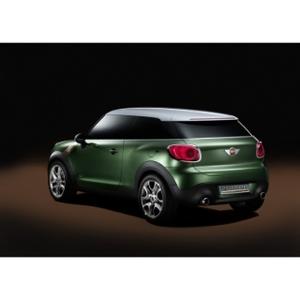 (PresseBox) ( München, 11-01-07 )
MINI arrives at the North American International Auto Show (NAIAS) in Detroit fuelled by innovative and sustainable ideas and an across-the-board focus on driving fun and individuality. Exactly 10 years ago, visitors to the NAIAS witnessed the relaunch of the MINI brand in North America, which signalled the beginning of an unparalleled success story. And now the brand is preparing to celebrate this landmark anniversary at the 2011 show with the world premiere of the MINI Paceman Concept. This spectacular study vehicle takes centre stage alongside the current model line-up and establishes a totally new category of car with its potential for providing even more driving fun and an even greater range of usage. The MINI Paceman Concept provides a fresh and distinctive interpretation of the hallmark style and innovative character of MINI.

As for cars already in series production, the MINI brand is represented at the 2011 NAIAS by the most attractive and diverse range of models in its history. Eye-catching design modifications, additional engine variants, a comprehensively updated selection of diesel engines and innovative new equipment items sharpen the appeal of the new MINI family in terms of design, driving fun, efficiency and individuality. With its MINI, MINI Clubman, MINI Convertible and MINI Countryman models, the world's only maker of independently developed premium small cars will continue to boast both the most extensive and the highest-quality range in the segment.

The masculine design language of the MINI Paceman Concept spotlights both the stand-alone identity of the concept and its membership of the MINI family. The four-seater study, whose two large doors and wide-opening tailgate mark it out unmistakably as a MINI, imbues the sporty, cutting-edge Sports Activity Coupe (SAC) category with undeniable appeal. The platform of the MINI Countryman, with its hallmark MINI proportions, increased ground clearance and raised seating position, defines the study's compact dimensions.

The MINI Paceman Concept takes the fundamental strengths of MINI - its uniqueness, go-kart handling, agility, dynamic capability and individual design - and gives them a fresh twist with the help of cutting-edge technology and an innovative body concept. It combines a sporty, masculine appearance, versatility and coupe looks with the dimensions of the four-door MINI Countryman. And it brings together the classical MINI concept, the defining features of the MINI Countryman and the style of a coupe to harmonious effect. The result is a MINI "muscle car", which displays its dynamic capability from every angle and showcases it impressively both when viewed from the side and in the design of the rear.

The MINI Paceman Concept, whose crossover design makes it the first Sports Activity Coupe (SAC) in the small car segment, blends lifestyle elements with premium quality. It is the ideal car for young, modern, extrovert urbanites who love the hallmark MINI go-kart feeling, enjoy stand-out individuality, place great importance on the personality of a brand and buy into its character and ethos.

The MINI Paceman Concept prioritises a particularly emotional driving experience and demonstrates this ability in a style typical of the brand. Here you can find clear evidence of how totally new vehicle concepts can still be developed today through unconventional creativity.

MINI Countryman: fun has no limits.

The MINI Countryman takes the hallmark driving fun of the brand into a new dimension. This is the first MINI to come with four doors and a large tailgate as well as a versatile interior offering space for up to five people. The MINI Countryman is the first member of the MINI family with a body measuring more than four metres (157") in length and which can be ordered as an option with all-wheel drive. With these features, in addition to the Countryman's raised seating position and optimised ride comfort, the world's only premium vehicle of its kind crosses the boundaries of urban mobility to take the trademark MINI feeling into new dimensions and win over additional target groups. Optional MINI ALL4 all-wheel drive allows the driving fun you expect from the brand to be experienced off the beaten track as well. The ALL4 system is available for the MINI Cooper S Countryman and MINI Cooper D Countryman. The selection of petrol variants ranges from the MINI One Countryman developing 72 kW/98 hp and MINI Cooper Countryman (90 kW/122 hp) to the 135 kW/184 hp MINI Cooper S Countryman, whose 1.6-litre four-cylinder engine is the most efficient unit in its displacement class. The petrol models are joined in the line-up by the diesel-powered MINI One D Countryman (66 kW/90 hp) and MINI Cooper D Countryman (82 kW/112 hp). All variants of the MINI Countryman meet the EU5 exhaust gas standard in Europe and the ULEV II standard in the USA.

Carefully targeted design modifications, even more efficient engines and additional innovative equipment features increase both the variety and the appeal of the MINI model range. For instance, the sporting character of the MINI, MINI Clubman and MINI Convertible is now highlighted even more sharply. And under the bonnet, the new-generation petrol engines already in place are now joined by newly developed diesel units to deliver another boost to efficiency. Based on the BMW Group's drive system expertise, the four-cylinder engines offer a further optimised blend of driving fun and fuel economy. The MINI Cooper D and MINI One D, in particular, have raised their game, posting CO2 emissions of 99 grams per km combined with fuel consumption of 3.8 litres per 100 km (74.3 mpg imp) in the EU test cycle.

The new MINI Cooper D Convertible sees the inimitable driving fun of an open-top MINI now combined with the pulling power and efficiency of a diesel engine. The newly developed four-cylinder diesel unit produces 82 kW/112 hp and accelerates the MINI Cooper D Convertible from 0 to 100 km/h (62 mph) in 10.3 seconds. The new model variant records average fuel consumption in the EU test cycle of 4.0 litres per 100 km (70.6 mpg imp) to go with CO2 emissions of 105 g/km. The other newcomer to the range is the MINI One D Clubman. The new entry-level diesel engine now also gives the Clubman unsurpassed levels of fuel economy. The new MINI One D Clubman sprints from 0 to 100 km/h (62 mph) in 11.8 seconds, burns an average of 3.9 litres of fuel per 100 km (equating to 72.4 mpg imp) in the EU test cycle and emits 103 g/km of CO2.

Among the other innovations presented at the North American International Auto Show is an all-new and globally unique form of in-car entertainment.

MINI Connected heightens the enjoyment of driving by intelligently linking the driver, the MINI and the outside world. MINI is the world's first car manufacturer to offer - with MINI Connected - a newly developed USB interface with exceptional functionality designed to maximise the integration of the Apple iPhone into the car's audio and infotainment system. An application available for MINI Connected comprises a web radio function, the use of Google local search and Google Send to Car services, and reception of RSS news feeds. Moreover, it also enables Facebook and Twitter posts to be displayed on the on-board monitor and allows the user to send standardised text messages.

The additional functions integrated into the MINI are activated and operated via the on-board control system. To use the full range of MINI Connected functions, customers need to specify their cars with either the MINI Visual Boost audio system or the MINI navigation system. Both options use a high-resolution colour display in the Centre Speedo and the MINI joystick positioned on the centre console to ensure comfortable, easy and intuitive operation.