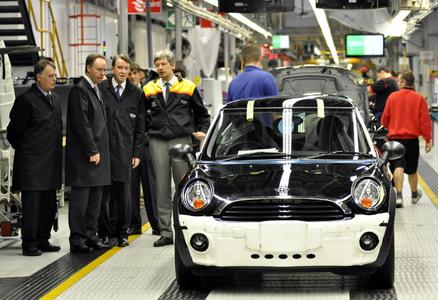 (PresseBox) ( Oxford, 09-10-16 )
Business Secretary Lord Mandelson today visited MINI Plant Oxford to see two recently-unveiled concept cars - the MINI Coupé and the MINI Roadster. Both have been confirmed for production at the facility where they will join the three current core models - Hatchback, Convertible and Clubman.

The cars were presented to Lord Mandelson in the plant's final assembly hall by Ian Robertson, member of the Board of Management of BMW AG, responsible for Sales and Marketing, and the plant's managing director, Dr Jürgen Hedrich.

Ian Robertson said: "In the year when MINI celebrates its 50th birthday, these two new models show our determination to create exciting cars for the future, to drive the brand forward. The UK and Oxford remain at the heart of MINI and we are delighted to confirm that these new cars will be built here.

"MINI has been a tremendous success story with a wide appeal around the world and is sold in over 80 countries. Its appealing design, the outstanding driving experience and its combination of excellent fuel economy and low CO² emissions have been vital factors in this success," he continued.

For the second year in a row BMW Group has cut its average CO² emissions per car by more than any other automotive manufacturer. According to an independent report published by the European Federation for Transport and Environment, the average reduction across the industry was 3.3 per cent, while BMW Group achieved 10.2 per cent.

Lord Mandelson said: "The British love the MINI and the addition of two new models demonstrates BMW's commitment to manufacturing in the UK.

"The exceptional skills and flexibility of the manufacturing teams across the production triangle of Oxford, Swindon and Hams Hall is a key factor to the success of the MINI across the world."

During his visit to the plant, Lord Mandelson met with production associates and trade union representatives. He was also presented with a special MINI model painted by the plant's apprentices.

Dr Hedrich said: "It was a great opportunity for Lord Mandelson to see what the future MINI family at Plant Oxford will look like and meet some of the members of the workforce who will make that future a reality.

"We're really proud that the Coupé and the Roadster will be built here - being able to add these two new cars to the existing three is a demonstration of our manufacturing flexibility."

The MINI Coupé is designed to accommodate the 1.6 litre twin-scroll turbocharged engine, built at the Hams Hall plant and carried over from the MINI - John Cooper Works, which has won Engine of the Year for three years running.

MINI is playing a further part in the journey towards a low carbon future with over 500 qualified applications received from people wishing to take part as pioneers in the forthcoming MINI E UK field trial. This will provide learning that will inform BMW Group's future decisions on the role electromobility will play in the future.

The MINI production triangle in the UK employs around 5,500 people. The vehicle assembly plant in Oxford currently operates six days per week and is supported by engine production at Hams Hall, near Birmingham, and the pressings and sub-assembly plant in Swindon.