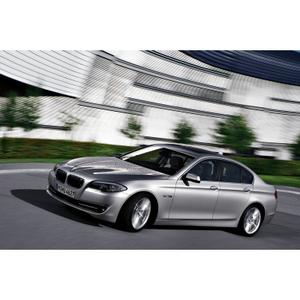 (PresseBox) ( Munich, 10-06-02 )
The epitome of aesthetic appeal and dynamic performance in the upper medium category now performs the function of a role model in the field of safety, too. The new BMW 5 Series passed the latest Euro NCAP crash test with the top rating of 5 stars. The sixth generation of the model series performed impressively on the test - which was extended to include additional criteria in 2009 - with its comprehensive safety fittings as standard as well as a highly effective vehicle occupant protection system for various different collision types. With its outstanding results on vehicle occupant protection for adults and children, pedestrian protection and standard safety features, the new BMW 5 Series moves into the leading position within its segment. It is also the first BMW model series to receive a 100 per cent on the Euro NCAP crash test rating for outstanding safety features.

The fact that the BMW 5 Series scored maximum points on the Europe's leading crash test is due to its integrated safety concept used by the premium automobile manufacturer in all new models. Highly resilient bearer structures and generously sized and precisely defined deformation zones provide the basis for the passenger cell to be able to perform its function as a survival space for occupants in the event of serious collisions. For example, the forces acting in the event of a headon collision are dissipated via a number of different load paths in the floor assembly, side frame, front wall and roof and absorbed in the deformation zones. Reinforced side structures in the B columns and sills, highly rigid door reinforcements and stable seat lower crossbraces reduce deformation depth as well as intrusion speed in the event of side collisions.

The highly efficient restraint systems in the interior of the new BMW 5 Series, all controlled by a safety electronics system, feature front and pelvisthorax airbags as well as curtain head airbags for both seat rows. All seats are fitted with threepoint automatic seat belts. The restraint systems are fitted with belt force limiters and the front seats also have a belt tensioner function. The front seats are also fitted as standard with active headrests which provide protection from cervical spine injury in the event of a rear impact. Depending on the type and intensity of the accident, the central safety electronics system triggers the most effective protection elements as appropriate. In addition, there are ISOFIX children's seat attachments on the rear seats as well as the option to deactivate the passenger airbag - both as standard.

One feature which optimises active safety in the new BMW 5 Series is DSC (Dynamic Stability Control). The precise control and unusually wide range of functions provided by this system ensure easily controllable and safe handling even in demanding situations on the road. What is more the Speed Limit Device, another standard feature, and the belt detection function for all seats also contribute to the fact that the new BMW 5 Series is the first product to receive a 100 per cent rating for safety fittings on the Euro NCAP crash test.

The NCAP (New Car Assessment Programme) test is regarded as one of the most demanding tests in the world to be applied to new motor vehicles. The Euro NCAP test is recognised as a benchmark for crash safety by governments, automobile clubs and consumer protection organisations throughout Europe. The test scenario includes a headon collision, a side crash and a side impact against a steel post. In 2009 additional criteria were added, with testing of electronic safety features as well as additional injury risks in diverse types of collision.

After analysing the test results, Euro NCAP testers certified that the new BMW 5 Series provides an extremely stable passenger cell which ensures extensive protection from injury both for driver and passengers, regardless of their size and seating position. Maximum points were especially scored on the side impact test, with particularly effective protection for adult passengers being achieved on all other test scenarios.

The analysis of vehicle occupant protection for children showed an outstanding performance by the new BMW 5 Series. The maximum point score was awarded on the test for seating systems designed for children aged three, for both headon and side impact. Both test scenarios also registered a stable position and minimum head movement at the moment of collision in the use of seating systems designed for children aged one and a half and three.

The NCAP crash test now attaches greater importance to pedestrian protection. The new BMW 5 Series meets modern demands with its elaborately modelled body elements featuring yielding structures at the vehicle front and an active bonnet which contributes to the reduction of injury risk in pedestrians and cyclists. Its pyrotechnical trigger mechanism is activated at speeds of between 25 and 55 km/h as soon as the data registered by sensors indicate a collision, raising the bonnet at the front and rear. The testers awarded maximum points for the front bumper and for those elements of the vehicle front section which are relevant to head injuries in children in the event of a collision.

Note: This press release is a 1:1 copy of the original issued by BMW headquarters in Germany. No adaptations have been made to cater for the UK market.