Note: This press release is a 1:1 copy of the original issued by BMW headquarters in Germany / No adaptations have been made to cater for the UK market 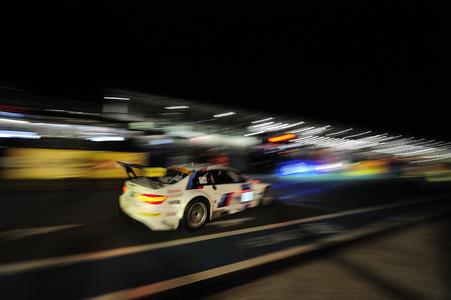 (PresseBox) ( Nürburgring, 11-06-24 )
The first qualifying session at the Nürburgring 24 Hours (DE) did not go according to plan for Team BMW Motorsport. The no. 7 BMW M3 GT was lying eighth overall by the end of the four-hour evening session. Dirk Werner (DE) clocked the fastest time of 8:32.302 minutes on the car's sixth lap. Prior to this, Dirk Adorf (DE) had completed four laps of the 25.378-kilometre circuit. However, qualifying came to a premature end for the German trio when Dirk Müller (DE) crashed in the "Karussell" two hours into the session.

In car number 1, last year's winners Augusto Farfus (BR), Jörg Müller (DE), Uwe Alzen (DE) and Pedro Lamy (PT) struggled with technical problems and consequently lost a lot of time in the pits while repair work was carried out. The drivers complained of vibrations in the car, and the team is now analysing the exact reason for this. Farfus clocked the fastest time of 8:36.669 minutes for car number 1. This puts the BMW M3 GT in 15th on the provisional grid. The fastest lap time of 8:23.764 minutes was set by the no. 2 Ferrari.

Dirk Müller lost control of car number 7 as he entered the "Karussell" and hit the crash barriers. A cameraman who was standing behind the barrier as the accident happened was taken to the hospital in Adenau for medical checks. According to the organisers, fortunately he was unhurt. However, as a precaution he will spend the night in hospital.

The right side of the BMW M3 GT was damaged in the accident. The team does not believe it will have any problems completing the repair work in time for the second qualifying session, which begins at 16:55hrs on Friday.

Augusto Farfus (car number 1): "My lap was ok, but we are obviously hoping to improve tomorrow. This is a 24-hour race, so the grid position is not crucial. Despite this, we still want to be further up the grid. I tried to lose as little time as possible in traffic. That was not at all easy. We will have to find out exactly what was causing the vibrations. So, we certainly have plenty to do before the second qualifying session."

Dirk Werner (car number 7):"Most of the fastest times were actually set during the early stages. I was out on used tyres again and managed a relatively clear lap. That is a rarity with more than 200 cars in the field. Our BMW M3 GT is working quite well, and we still have a bit of time to work our way up the field."

Dirk Müller (car number 7):"I lost the rear of my BMW M3 GT as I braked, shot over the Karussell and hit the crash barriers. The most important thing is that, according to the organisers, the Japanese cameraman is okay. I am sorry he was hurt in the crash. The damage to our car does not seem to be so serious. However, it is obviously not helpful to miss more than half of the qualifying session."