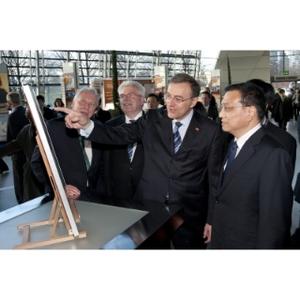 (PresseBox) ( Munich, 11-01-08 )
The BMW Group underlined the company's long-term commitment to China during the visit of the Vice-Premier of the State Council of the People's Republic of China, Li Keqiang. "Close and long-standing ties exist between China and the BMW Group," said Chairman of the Board of Management of BMW AG, Norbert Reithofer, at the BMW Welt in Munich on Saturday. Li Keqiang visited the BMW Group with a delegation to learn more about topics such as future mobility. During the visit he received information concerning, for example, the MINI E, the BMW Active E as well as the technology of future BMW Group electric vehicles. The BMW Group will work together closely with the Chinese government on future mobility.

The company is also supporting the market launch of electric vehicles in China through a number of projects. Series production of an electric vehicle developed jointly with its local joint venture partner is scheduled to begin in 2013. "The BMW Group and its partner, Brilliance, are making a joint contribution to sustainable mobility in China," Reithofer said.

For instance, an electric-powered BMW 5 Series Long Version was developed as part of the first Sino-German electro-mobility research project in collaboration with Tongji University in Shanghai. In addition, the worldwide MINI E fleet trial will also be extended to the Chinese cities of Beijing and Shenzhen from 2011 onwards. The MINI E will be tested in everyday driving through a consortium made up of the energy partners, State Grid Corporation and Southern Grid, and the China Automotive Technology and Research Corporation (CATARC). The same applies to the BMW Active E, a fully-electric powered vehicle based on the BMW 1 Series, which will be on the roads in China later this year.

The BMW Group has been building BMW 3 Series and 5 Series models at its Chinese facility in Shenyang with its joint venture partner, Brilliance, since 2003. The company announced the construction of a second production plant in China in November 2009. The BMW X1 will also be built at the new plant in the future. The investment volume for the new plant in Tiexi, in the Shenyang region, amounts to a total of 560 million euros, shared equally between the BMW Group and its partner, Brilliance. Production is scheduled to begin in 2012 and will create more than 4,000 new jobs in Shenyang over the coming years.

This will increase the BMW Group's annual production capacity in China significantly to more than 150,000 vehicles from 2012 on. Over the long term, the two plants will have the combined potential for 300,000 vehicles a year, depending on market developments.

China is now the company's third-largest market. As per November 2010 more than 152,000 vehicles were sold in China - an increase of 90%. This meant that the company easily exceeded its original sales target for China of approximately 120,000 vehicles. The BMW Group is also confident about its business performance in China for the current year: "We expect to see a double-digit percentage increase in sales growth in China in 2011, in line with market forecasts," Reithofer explained.

Impetus will come from vehicles like the new BMW X3, the new BMW 6 Series and the MINI Countryman, all of which will launch in China this year. In light of the strong market growth in China, the BMW Group will further expand its dealer network in 2011.