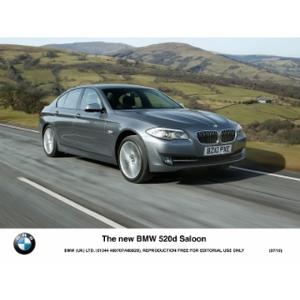 (PresseBox) ( München, 11-05-11 )
BMW picked up the accolade for Fleet Manufacturer of the Year at the prestigious 2011 Fleet World Honours, for the second year in a row. While being crowned with the top award, BMW was also honoured with the prize for Best Executive Car.

Steve Moody, Fleet World Editor, said: "This award marks the pinnacle of achievement in an industry that is incredibly important to the UK economy. Fleets typically account for around one-half of all the cars sold in the UK and many of these are purchased by contract hire and leasing companies on behalf of their corporate clients. For this reason we asked the managing directors and operations directors of the UK's top 20 leasing companies to nominate their choice of Fleet Manufacturer of the Year and BMW was a clear, almost unanimous winner.

"It is very clear from the feedback we received that BMW's corporate sales team pays a great deal of attention to the leasing sector and has worked in close partnership with them over the years. And let's not overlook a fantastic model range of desirable and economical cars that are still the number one aspiration of so many company car drivers."

Since its launch in 2010 the BMW 5 Series has been a hit with both retail and fleet customers alike. This popularity led to it taking home the crown for Best Executive Car for the second year in a row. Commended for its blend of quality, performance and efficiency, it was the 5 Series' overall package that impressed the judges and lead to it taking home the top gong.

Steve Moody said: "Is the 5 Series the most complete car in the world? Powerful yet efficient engines, elegant looks, an interior that would challenge most luxury cars in terms of comfort and quality, underpinned by a chassis that offers agility and refinement. To top it off, the 5 Series comes at a price its competitors struggle to match, while residuals are sky high too."

Speaking after BMW's successes at this year's awards Stephen Chater, Corporate Operations Manager for BMW Group UK, said: "To win these awards means a lot to BMW. Not only do they recognise the developments in the product range but also the service and customer focus of the BMW Group corporate sales team, both of which have shown real benefits for fleet decision makers and company car drivers alike."

With its three brands - BMW, MINI and Rolls-Royce - the BMW Group is one of the world's most successful premium manufacturers of cars and motorcycles. It operates internationally with 24 production sites in 13 countries and a global sales network with representation in more than 140 countries.