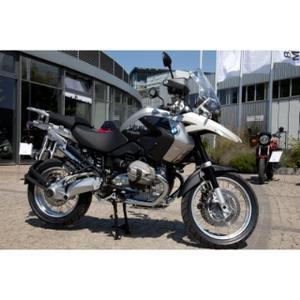 (PresseBox) ( München, 11-05-12 )
BMW Motorrad celebrated the two-millionth motorcycle to roll off the assembly line at its BMW plant in Berlin Spandau. Motorcycles have been manufactured on this site since 1969 and bikes from the plant have been exported to 130 nations around the world.

This manufacturing milestone, which occurred on 6 May, 2011, was celebrated in style with a special ceremony attended by Klaus Wowereit, Governing Mayor of Berlin, BMW Motorrad employees across the company and a host of invited guests.

The bike which marked the milestone - a one-off special-edition R 1200 GS - was unveiled to a selection of VIPs and journalists by streetbike freestyle legend Chris Pfeiffer, after which it was handed over be raffled off as part of the 'be Berlin' campaign to promote the city.

Christian Pfeiffer said: "I'm really proud to present the two millionth BMW motorcycle here today. I have a really busy schedule but this kind of thing doesn't happen every day so I really wanted to be here."

Pfeiffer then parked the GS and leapt onto his F 800 R stunt bike to perform a special show in front of the invited guests and members of the Berlin plant workforce. He finished his display with a burnout with his rear tyre rubber spelling out '2,000,000' on the tarmac.

Hendrik von Kuenheim, Head of BMW Motorrad, said: "BMW motorcycles embody 'sheer riding pleasure' in its most direct form and these machines are ambassadors of the BMW brand - and at the same time ambassadors of Berlin - all over the world. BMW bikes are exported with 'Berlin's air in the tyres' to 130 countries and the long-standing relationship between Berlin and the BMW Group looks set to continue for a long time."

With 1,900 employees the BMW factory in Berlin produces up to 510 motorcycles a day from all model series, as well as about 24,000 brake discs for the car division. The annual motorcycle output in 2010 amounted to 97,076 machines, whereas in the first year of production in 1969, a total of 12,000 motorcycles were produced in Berlin.