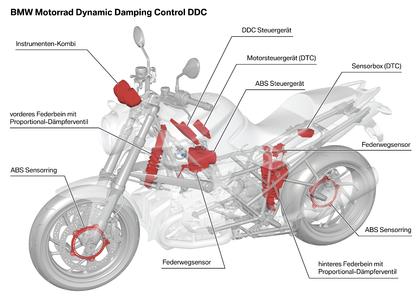 Semiactive suspension technology for the future.

Making motorcycles better, safer, and more fun to ride with innovative developments has been one of the BMW Motorrad core competences for decades. As the leader in this technology, BMW Motorrad presents new solutions in quick succession that usually soon become indispensable in series motorcycles. Now a new step in development is in the offing: the semiactive suspension control system Dynamic Damping Control, in short DDC.

As early as 1986, BMW Motorrad achieved a milestone in suspension technology by launching the Paralever swingarm, an innovation that considerably improved rear suspension and the transfer of forces. In 1993, the freshly launched opposed twin "boxer" engine series was the first to be fitted as standard with a front suspension system that operated independently of the rear known as Telelever. Yet another revolutionary step in suspension technology was taken in 2005, when the Duolever offering extreme torsional rigidity for the front wheel was launched.

Bikers were also able to benefit early from pioneering innovations in drive control. In 1988, with the launch of ABS in the BMW K1, BMW Motorrad presented the first antilock brake system to be fitted as standard on motorcycles. Since 2007, the automatic stability control system ASC has been preventing the rear wheel from spinning out of control. In 2009 there followed Dynamic Traction Control (DTC) which also analyses the vehicle's inclination, a first on a series production motorcycle.

And BMW Motorrad has always been that one step ahead in suspension control systems as well. 2004 saw the advent of ESA, the electronic suspension adjustment system, which allowed the rider to adjust suspension elements at the push of a button - also a first on series production motorcycles. In 2009, the successor system ESA II went a step further and was the first to provide spring rate variation.

The next logical step in the development of suspension and control systems is taking concrete shape. The next stage of evolution in this field is the automatic adjustment of suspension elements to diverse operating conditions like varying road surfaces or certain manoeuvres. BMW Motorrad achieves this through Dynamic Damping Control DDC.

Analogous technologies have been used with great success in BMW automobiles, for instance the BMW M3 and BMW M5, for years now. This gives rise to valuable synergy effects for internal developments. The challenge: adapting the system to the requirements of motorcycle physics and integrating this in the relevant control systems.

The evolution: from ESA II to DDC.

BMW Motorrad announced the considerable progress it had made in adapting its systems to varying payload and road surfaces by launching ESA II, the new electronic suspension adjustment system. This lets the rider adjust the Duolever, Telelever, and Paralever damping properties as well as the rear wheel spring rate or its "tightness", all at the convenience of pressing a button. The characteristics the rider can select for suspension and damping provide a range of tuning and payload settings for all road conditions that is yet to meet its match. In conjunction with the three tuning variants "Comfort", "Normal", and "Sport", ESA II therefore opened up a new dimension of ride stability with the best response in all operating and payload configurations.

In this form, ESA II was the first electronic suspension tuning system worldwide to provide these configurations on motorcycles at all.

With the object of achieving even greater stability and safety in riding response, Dynamic Damping Control DDC goes a step further. DDC is a semiactive suspension system which reacts automatically to manoeuvres like braking, accelerating, and cornering on various road surfaces and analyses the situational parameters provided by sensors to set the correct level of damping at electrically actuated proportional damping valves.

DDC is linked to the traction control system DTC and ABS via the CAN bus. The system recognises the control activities by the other systems and adapts the damping as the situation requires. The adjustments to damping depend on whether the springs are compressing or rebounding, with each process being controlled separately.

The damping is adjusted at an electrically actuated, proportional damping valve that features a variable ring gap and therefore variable flow cross section for the damper oil. The inversely proportional adjustment to flow rate and pressure gives rise to a change in damping force within milliseconds to adapt to new conditions.

Unlike ESA II, the dynamic damping control system DDC does not make use of characteristic curves, but characteristic maps that provide the optimal damper tuning within a defined range. Selected at the press of a button, three characteristic maps for the basic configurations "Comfort", "Normal", and "Sport" let the rider realise his own wishes on this system too. As known from ESA II, the selected configuration is displayed in the instrument cluster. Analogously to ESA II, DDC also features variable spring rates.

The operating principle of DDC.

A number of examples quickly provide some insights into the advantages for certain riding situations. Before the rider sets off, activating the ignition first initiates the system check and the flow of information from the engine control, ABS control unit, sensor box (DTC), and the spring travel sensors to the DDC control unit. This appears on the display in the instrument panel.

When the motorcycle sets off, the valves in the front and rear dampers are actuated only marginally (supplied with power) when the speed exceeds a definable value. When the rider accelerates, e.g. when leaving the city limits, the valve in the rear strut is actuated more strongly owing to the changes in dynamic wheel load distribution and in the drive torque. Once the target speed has been reached, valve actuation drops back to its original level (less power supply than setting off). Information flows from the throttle grip via engine control to the DDC control unit, and from there to the damping valves.

When the rider takes a series of corners, both damping valves are actuated more strongly with increasing inclination - starting from the low power supply - until the vertex is reached. When the vehicle returns upright between two corners, the actuation of the two damping valves constantly drops to the original power level with decreasing inclination. When the motorcycle turns into the second corner, valve actuation again rises proportionally to the angle of inclination and again drops from the vertex value. Information flows from the sensor box (DTC) to the DDC control unit, and from there to the damping valves.

When the motorcycle brakes, e.g. at a rail crossing, the actuation of the front damping valve increases proportionally to the deceleration so that the damping forces and therefore riding stability increase as a result. In this case, Dynamic Damping Control DDC analyses both the dynamic phase of braking, until constant deceleration and wheel load distribution, and the subsequent static phase.

Once the adjusted speed has been reached (here for passing over the rail crossing), the power supply and therefore the actuation return to their original values. At the same time, information flows from the hand brake pump on the handlebar to the ABS, and from there via the DDC control unit to the valves.

When the motorcycle is passing over the rail crossing (here representing all types of uneven road surfaces), the valves in the front and rear dampers are actuated (powered) proportionally to the respective compression travel. In this case, information flows the front and rear spring travel sensors via the DDC control unit to the valves.

The benefits of the dynamic damping control system DDC are obvious.

Within the shortest of times the system evaluates a huge amount of information and selects the high precision suspension configuration best suited to the situation. This provides a considerable boost to active riding safety, operating comfort, and - not least of all - riding fun.

The suspension damping system DDC will be introduced to the first BMW Motorrad series motorcycles in the near future.