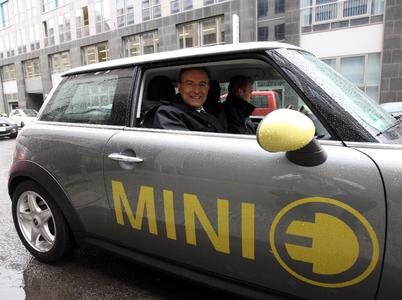 (PresseBox) ( Berlin, 10-05-03 )
The BMW Group is taking an active role in the "national platform for electromobility" launched by German Chancellor Angela Merkel in Berlin on Monday. The BMW Group will contribute its many years of experience in the area of electromobility to the project, plus the extensive scientific results from field tests currently being carried out with the MINI E. The "basic conditions" working group will be chaired jointly by Dr Klaus Draeger, Member of the BMW AG Board of Management responsible for development, and Prof. Lars-Hendrik Röller from the European School of Management and Technology.

The aim of this joint initiative - which brings together the worlds of politics, science and industry - is to further strengthen the pioneering role of Germany in the area of electromobility. "Germany is well positioned to become an international leader in the area of electromobility over the long term. To make this happen, our leaders in politics and industry have to be pulling in the same direction," said Norbert Reithofer, Chairman of the BMW AG Board, in Berlin on Monday.

The BMW Group has been conducting intensive investigations into the issue of electromobility for many years and plays a leading role in this area. Since mid-2009 the company has been gathering valuable information on the everyday usage of electricallypowered vehicles as part of a worldwide pilot project involving 600 MINI E cars. For example, in Germany the company has teamed up with its partner Vattenfall to release 50 of the cars to customers in Berlin as part of a project supported by the Federal Ministry for the Environment, Nature Conservation and Nuclear Safety.

Initial results from the Berlin study after more than six months of usage show that the electric car's limited range is proving - in the vast majority of cases - to be sufficient for the participants under everyday conditions. Added to which, the charge time required for the MINI E does not have a restrictive effect on users. In the target group for the car, i.e. city dwellers with small cars, the MINI E is used in a comparable way to a conventional vehicle.

The BMW Group sees emobility as one element in a future system of mobility which comprises several different fuels and drive systems (electric and combustion engines, hybrids), each competing to provide the best solution for the varying requirements of customers.

The Megacity Vehicle, an emissionfree city car for the world's metropolitan regions, is currently being developed as part of project i, and will be available under a BMW subbrand from 2013. With weight a key factor in determining the range of electrically powered vehicles, the company is set to branch out into new territory with its choice of materials for the Megacity Vehicle. Indeed, the extremely lightweight yet highstrength composite material CFRP (carbonfibre reinforced plastic) accounts for a large proportion of the materials which make up the car.

The "basic conditions" working group will focus on the measures which need to be put in place to meet the German government's planned figure of onemillion electric vehicles on the country's roads by 2020. Here, the key issues are the necessary infrastructure, the provision of renewable energies, a stable legal framework and future technology trends.

The BMW Group achieved a global sales volume of approximately 1.29 million automobiles and over 87,000 motorcycles for the 2009 financial year. The pretax profit for 2009 was euro 413 million, revenues totalled euro 50.68 billion. At 31 December 2009, the company employed a global workforce of approximately 96,000 associates.