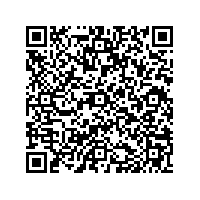 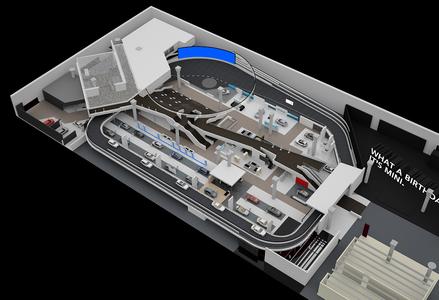 (PresseBox) ( Munich, 09-09-01 )
The IAA Frankfurt Motor Show will open its doors to the press on 15 September 2009. What makes this show special for the BMW Group is that, for the first time, all three brands - BMW, MINI and Rolls-Royce Motor Cars - will exhibit under one roof, located in the Frankfurt Trade Fair's new Hall 11. Europe's latest state-of-the-art exhibition hall is accessible to visitors directly from the exhibition grounds' new main entrance. The highlight of BMW's presence this year is a circuit several hundred metres long running around the entire exhibition space on which the BMW EfficientDynamics fleet and vehicle premieres will be presented. Thomas Muderlak, responsible for the BMW Group's exhibition concept at the IAA: "Motor shows are an important aspect of our communication with customers, the media and trade visitors. We are delighted to maintain our tradition of hosting innovative displays at the 2009 Frankfurt Motor Show and present all three brands together for the first time. A highlight for our visitors will be the chance to experience our vehicles actually driving around the BMW stand: We will be interpreting the BMW brand's motto of "Sheer Driving Pleasure" quite literally.

In 2003, 2005 and 2007, the BMW brand was housed in a Cubist building on the so-called Agora, while MINI and Rolls-Royce Motor Cars were located in different halls. Presenting the three brands in such close proximity this year will allow the BMW Group to showcase various corporate initiatives. As the organizer of the BMW Group Junior Campus and the host of the ZEIT Conference, the BMW Group will take advantage of the opportunity to create a forum for overarching social issues such as sustainability. From 15-27 September 2009 children aged between 3 and 13 years will be able to discover the fascination of sustainability and mobility at the Junior Campus. Both instructive and fun, sustainability workshops for children aged 7 to 13 will focus on topics such as conserving resources, traffic control and sustainable production. Children will conduct their own independent, interactive research, perform tests and experiments, and have fun acquiring the know-how they need to build their own car at the end of the roughly two-hour workshops. The BMW Group Junior Campus also features two age-based driving courses that teach young IAA visitors how to behave responsibly on the roads.

As part of the socio-political debate on mobility and sustainability, the BMW Group's ZEIT Conference future summit on 14 September 2009 provides a platform for a panel discussion with high-ranking representatives from the worlds of politics, business, architecture and environmental protection. The Sustainable Value Report 2009/ 2010 will also be presented at the BMW Group press conference on 15 September 2009.

The basic concept behind the BMW brand's presence at the 2009 Frankfurt Motor Show focuses on sheer driving pleasure. For the first time, IAA visitors can experience the vehicles' design and appeal in motion - thanks to the moving presentation of vehicles on the circuit. A varied programme will highlight new products and innovations from the BMW portfolio. Visitors will be able to observe these driving demonstrations from stunning lounges with an impressive view of the circuit's banked corner.

The BMW EfficientDynamics fleet presented on the circuit will provide an impressive demonstration of how driving pleasure can be combined with lower fuel consumption. Thanks to Efficient Dynamics, BMW is able to prove conclusively that this is not a contradiction in terms: With its two most recent model generations, the BMW Group has reduced its fleet's consumption in Europe by more than 25 percent while enhancing driving pleasure. By the time the Frankfurt Motor Show opens, around 1.4 million BMW vehicles equipped with the award-winning BMW EfficientDynamics technology - which comes as standard in every new BMW - will have been delivered to customers.

The BMW Vision EfficientDynamics concept car, which will be presented to a global public for the first time at the Frankfurt Motor Show, incorporates a wider range of BMW EfficientDynamics technologies than any vehicle before: from its ultra-efficient combustion engine, sophisticated energy management and BMW ActiveHybrid technology with innovative electricity-storage technology to lightweight construction and consistently optimised aerodynamics. The 2+2 seater was designed as a plug-in vehicle using full-hybrid technology and provides the capabilities to combine the driving performance of a BMW M automobile with fuel consumption and emissions that are even lower than for today's compact cars.

The new BMW 320d EfficientDynamics Edition will be presented alongside the BMW 320d for the first time at the 2009 Frankfurt Motor Show. The sedan combines a fuel consumption of just 4.1 litres diesel per 100 kilometres and CO2 emissions of 109 gram per kilometre in the EU test cycle with an engine output of 120 kW/163 hp. This model further asserts BMW's acknowledged superiority in the development of especially low-emission models with dynamic driving performance. The following models will further enhance the efficiency and dynamic performance of the model range: the BMW 520d Special Edition and the BMW 116d, the BMW 116i, the BMW 120i Coupé, the 118d Coupé and the BMW 730d with BMW BluePerformance (EU6 norm) models.

Other world premieres at the 2009 Frankfurt Motor Show:

Besides its Efficient Dynamics fleet, the BMW stand will also focus on the world premiere of the hybrid vehicles BMW ActiveHybrid 7 and BMW ActiveHybrid X6 as well as the world debut of the BMW X1 and the BMW 5 Series Gran Turismo. The BMW ActiveHybrid 7 sedan and the BMW ActiveHybrid X6 Sports Activity Coupé each incorporates its own model-specific combination of combustion engine and electric motor for an extraordinary, and impressively efficient, driving experience. The BMW X1 is the first vehicle in the premium compact segment to embody the characteristics typical of a BMW X model. Thanks to BMW EfficientDynamics, it boasts the best combination of driving performance and fuel consumption of any of the BMW X models' rivals. As the founding member of a new segment, the BMW 5 Series Gran Turismo unites the key features of a prestigious sedan with those of a modern Sports Activity Vehicle and a classic Gran Turismo. The BMW 740d, scheduled for launch in autumn 2009, will be a further focus of attention: It is the first model equipped with a new straight-six diesel engine with BMW TwinPower Turbo Technology.

Visitors can also look forward to other product innovations, such as the BMW Power Kit for four-cylinder diesel models, new BMW rear luggage racks and the latest portable navigation systems.

More detailed product information can be found in the BMW Group PressClub at https://www.press.bmwgroup.com/.......

The MINI Stand: "What a Birthday. It's MINI."

On 26 August of this year, MINI will celebrate its 50th birthday. In honour of this special occasion, the MINI stand will focus on the brand's 50-year success story. Its architecture also reflects this agenda: Visitors to the stand will be welcomed by an oversized "What a Birthday. It's MINI." banner, stretching diagonally across the entire space of the stand with a length of 35, a height of six and a depth of four metres. Directly below, at the heart of the exhibition area, is the "birthday studio" which shows "MINI 50 Years" - a documentary film that spans the years from 1959 to 2009 and gives MINI drivers and MINI fans from around the world the chance to speak their mind.

The MINI premieres awaiting visitors to the Motor Show include the MINI 50 Camden and MINI 50 Mayfair birthday editions. With their characteristic design and exclusive features, the two models honour both the car's sense of tradition and the brand's strength of vision. The market launch of the new MINI 50 Camden also marks the emergence of a new generation of in-car entertainment systems. Referred to as "Mission Control", this entertainment system evaluates a wide range of vehicle, driving and ambient data, providing the driver with relevant information and instructions in hallmark MINI-style - with voice output.

MINI will present its spectacular vision for the brand's sixth decade of driving fun, the MINI Coupé Concept, for the first time at the 2009 Frankfurt Motor Show. The car's extreme lightweight construction makes the two-seater exceptionally responsive - not to mention particularly fuel-efficient. The MINI Coupé Concept's design and capability for high-performance drive technology ensure it has everything a premium compact sports car needs. The low roofline, a sharply defined rear cut line and other details optimised for improved aerodynamics further enhance the vehicle's driving performance and efficiency. The MINI Coupé Concept is for those drivers who appreciate MINI's signature combination of driving fun, lifestyle and premium quality - and seek even sportier handling.

Ideal starting conditions for the MINI One D

In this, its anniversary year, the brand is presenting its most diversified and attractive MINI model range ever. The newest addition to the portfolio is the MINI One D. This new entry-level diesel model offers customers especially affordable access to the MINI brand's world of driving fun and premium quality.

Another focus at the MINI stand at the IAA 2009 is the MINIMALISM concept - a package of measures developed to optimise fuel consumption and reduce emissions, presented in a futuristic, hands-on discovery area.