BMW Classic is launched in the UK 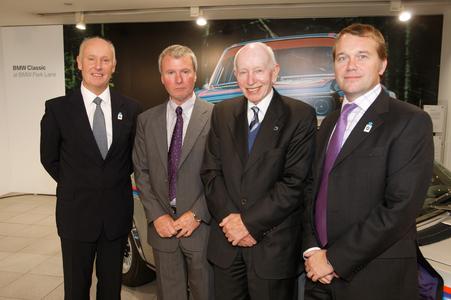 The service, already successful in Germany, will provide owners of classic and historic BMWs with the parts they need to keep their highly-treasured and valuable cars on the road.

To mark the launch of BMW Classic at BMW Park Lane ten iconic cars, some of which belong to the BMW Museum in Munich, have gone on display at the Park Lane showroom. The 'Hall of Fame' exhibition will remain open to the public until Tuesday 19 October. The cars range from the BMW 3/15 PS of the 1930s to the more recent M3 CSL, and encompass the 328, 3.0 CSL, M1 and M3 E30, racing versions of which cemented BMW's position as one of motor sport's most successful manufacturers.

BMW Classic co-ordinates all the activities connected with the company's history, and BMW Park Lane's launch of the initiative in the UK will also provide a conduit to unprecedented service and skills at the manufacturer's Munich headquarters.

"BMW Classic at BMW Park Lane is a specialist service, providing customers with access to highly skilled individuals who have extensive knowledge of older BMW models, and who are dedicated to helping customers find the parts they are looking for," said Partridge.

"The BMW Classic catalogue currently extends to 34,000 parts, covering a wide range of vehicles dating back to the 1930s. BMW Classic is able to offer more parts for more cars than ever before, and this new service makes them more readily available and accessible."

If a part does not exist, it can be made in Munich - that is because BMW Classic has retained the technical drawings for every part for every model ever produced.

"BMW Classic knows the exact specification of every car that has ever been made," added Partridge. "In theory, if there is sufficient demand for it, BMW Classic can manufacture any part for any BMW vehicle. BMW takes its heritage very seriously and BMW Classic is a service that we feel extremely privileged to be able to offer."

Surtees numbers several desirable BMWs among his collection of vehicles, including a 507. "After winning my first motorcycle World Championship title in 1956, Count Agusta offered to buy me a present," said the double World Champion. "Tongue-in-cheek I suggested a 507 - we settled on him paying 50 per cent!"

Surtees, who is still the owner of that 507, has already had cause to be thankful to BMW Classic. "I recently took my 507 to the Goodwood Revival," he said. "It still runs extremely well - we are talking about a 53-year-old car. It must still be under guarantee, because when the rotor on the distributor failed, I went to see BMW Classic at the Revival and they were kind enough to give me one from one of the factory cars they had on display! This will be a fantastic service for BMW enthusiasts in the UK."

A 507 is one of the 10 cars on display in the exhibition at BMW Park Lane, while others include the Z1 and Z8 roadsters, plus a 2002 tii built mostly from BMW Classic parts just five years ago.

"For the launch exhibition we have selected a combination of cars that reflect the company's rich heritage - and cars that excite us," said Partridge. "We are struggling to think of an event in the UK where so many iconic BMWs have been in the same place at the same time."

Tim Abbott said, "This year the BMW Group is likely to produce around 1.4 million new vehicles worldwide - an increase of more than 10 per cent over last year - but it also has a wonderfully rich heritage that we are extremely proud of. It is important that we remember where the company has come from and the number of iconic, reputation building cars that BMW has designed and built over the years. The BMW philosophy is that cars are meant to be driven and this is perfectly reflected by BMW Classic. The parts supply and restoration service will enable more customers to keep their BMW classics on the road."

The BMW Group achieved a global sales volume of approximately 1.29 million automobiles and over 87,000 motorcycles for the 2009 financial year. The pre-tax profit for 2009 was euro 413 million, revenues totalled euro 50.68 billion. At 31 December 2009, the company employed a global workforce of approximately 96,000 associates.

The success of the BMW Group has always been built on long-term thinking and responsible action. The company has therefore established ecological and social sustainability throughout the value chain, comprehensive product responsibility and a clear commitment to conserving resources as an integral part of its strategy. As a result of its efforts, the BMW Group has been ranked industry leader in the Dow Jones Sustainability Indexes for the last five years.

Recommend BMW Classic is launched in the UK press release