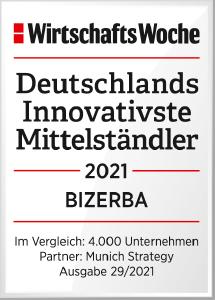 (PresseBox) ( Balingen, 21-08-05 )
Bizerba is once again setting standards: Germany's leading business magazine, the Düsseldorf-based "Wirtschaftswoche", awards the owner-managed family business as one of the most innovative medium-sized companies in Germany 2021. In the renowned ranking, which is compiled annually by the management consultancy Munich Strategy for the weekly magazine of the Handelsblatt Media Group, Bizerba achieves an outstanding 2nd place.

Top ranking In its assessment, the "Wirtschaftswoche" particularly emphasises the technological innovation leadership of the traditional Balingen-based company. Bizerba has convincingly expanded its previous business model to include digital services, without sacrificing quality in shop scales, the product with which Bizerba became known. For example, it recently succeeded in convincing Amazon to use its in-house cutting and weighing technology in its supermarkets of the future. Under the leadership of Andreas Kraut, Bizerba has grown into a showcase company in terms of digital transformation.

"SMEs are the backbone of the German economy and enjoy the greatest recognition worldwide for their performance. To come second in the ranking among the most innovative SMEs in this environment fills all of us in the company with great pride," says Andreas Wilhelm Kraut, Chairman of the Board, CEO and shareholder of Bizerba SE & Co. KG.

Whether it's Bizerba's latest generation of shop scales K3 in the subscription model, the artificial intelligence (AI) based solution "Supersmart powerd by Bizerba" or the CleanCut® Linerless Solution - Bizerba remains the innovation leader in the industry as it has been for the past 150 years. "We fight for this position every day anew with commitment and team spirit. This is how we secure jobs at all locations in Germany, in Europe and worldwide," Kraut emphasises.

The ranking "Germany's most innovative medium-sized companies" is compiled annually exclusively by the management consultancy Munich Strategy for the "Wirtschaftswoche" and is one of the most renowned awards for companies in Germany. 4,000 companies were evaluated.

Wirtschaftswoche" is published by the Düsseldorf-based Handelsblatt Media Group, the leading media house for business and financial information in Germany, and reaches 830,000 decision-makers every week.

Bizerba is one of the world's leading suppliers of precision products and holistic solutions for all activities related to cutting, processing, weighing, checking, picking, labeling and payment. As an innovative company, the Bizerba Group is continuously driving forward the digitalization, automation and networking of its products and services. Thus, according to the motto "Unique solutions for unique people", Bizerba offers its customers from trade, commerce, industry and logistics greater added value with complete state-of-the-art solutions - from hardware and software to app and cloud solutions.

Bizerba was founded in 1866 in Balingen / Baden-Wuerttemberg and is today one of the top players in 120 countries with its solution portfolio. The family-run company, now in its fifth generation, employs around 4,300 people worldwide and has production facilities in Germany, Austria, Switzerland, Italy, Spain, China and the USA. In addition, the group of companies maintains a worldwide network of sales and service locations.

Further information about Bizerba can be found at www.bizerba.de

Bizerba cooperates with Italianpack for packaging lines for supermarkets

Despite the Crisis, Bizerba is Increasing Sales and Investing in the Future